Giaa Manek who essays the lead role of Gopi Bahu in Star Plus' successful show Saathiya simply cannot believe that she is a household name today..

Here is the girl describing her remarkable journey and on how the success has exceeded her expectations, to TellyBuzz.. 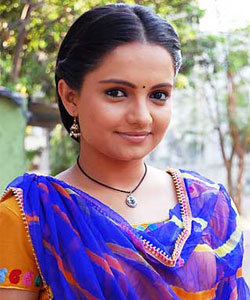 Saathiya on Star Plus is today a success story. How exactly did you get this role?
Actually I had given an audition earlier for Palkon Ki Chao Mein, but things did not work out there. This is when I was prompted to give an audition for the same production house's new show for Star Plus. I got a call for the tests and after all the tests I finally got selected. But I later got to hear that I was not the first choice to ply Gopi. The production house had in fact shot few episodes with three other girls, but finally it was me who lapped up the role (smiles).

Saathiya is today one of the highest rated shows in television; how do you feel?
I feel on the top of the world right now because initially, when the show started I was really upset with the time slot. I  bfelt it was an early slot for a daily soap, but this actually did wonders for all. We had really worked hard and the show is really special for me. Being my first show, I did not want the show to go off-air because of low TRPs. But then the show has been accepted very well and we are proud to have started the trend of the 7 pm slot.

Gopi Bahu is today looked upon as an ideal daughter in law, how do you feel?
I feel really good that I am looked upon like one ideal person and people do come and ask me whether I am really like that. I usually reply that I am similar to Gopi in sensitivity as I can cry at the drop of my head. And also family is a big priority for me even after marriage. On the contrary, I am not at all silent and soft like Gopi and I am a complete brat who talks too much.

How is your rapport with your co-actors?
I have an excellent rapport with everyone on the sets and I gel well with all of them and my best friend is  Rupal Patel. Actually I always play pranks on all and sometimes Rucha gets irritated, but at the end of the day she gets fine. And I pull legs of Ahem also as he is like a complete Gopi Bahu off screen. Vishal is also a good friend of mine.

How do your relate yourself with Gopi?
I am a little sensitive like Gopi and also I like the positivity Gopi has. In that way the character makes me a better person. Gopi Bahu knows that whatever that is happening in her life is because of a reason and does not complain at all. I can relate to the character in that way.

What were the preparations that you did for the character?
Since I am a Gujarati myself, I did not have to work much on my language. But then I had to make an effort to reduce the speed of my talk and become a little soft spoken. And to remind myself about the character, I used to narrate about Gopi and her life to everyone around me.

Now that you are back in the house, how will we see the track being developed?
Gopi is back in the house because of Naani and now Ahem also has started talking to Gopi because of her. But at the same time Ahem still loves his ex girlfriend and I will have move out of the house once Naani goes. I do not know whether Ahem will start loving Gopi in future.

How is it working with Rashmi Sharma?
It has been a very good experience with them and the team is really understanding.

You recently had a visit to Macau for the grand event of Star Parivaar Awards, how has the experience been?
The experience had been great even though it was very hectic and I was involved in a lot of stuffs. But I did not get much time to do shopping as we were busy with the work in hand.

Any memorable instances you carry from Macau?
This is my first trip abraod without my parents and hence I had a responsibility to take care of myself, my passport and the other belognigs. But since the entire unit was there with me and since all the members were so sweet the whole trip went well.

How was it to represent the one big star family at the Star Parivaar Awards?
I felt really great and also I got to compere a segment with Ayushman and I need to thank him because he handled it well (laughs). I won an award at the event and also performed an act with Ahem as well.

Can you tell us something about your upbringing?
I was born in Ahmedabad but was brought up in Mumbai. I am a complete Mumbaite and I love non-veg food and am a complete foodie. I did my majors in Advertising and it was during my college days that I started giving auditions. I had done a movie with Om Puri and Neena Gupta called Naa Ghar Ke Naa Ghat Ke. As soon as the film got over I was signed to do the show.

Any memorable moments from the show?
Actually everyday is a memorable day for me as I enjoy every moment on the sets even if others are moody. If they ask me to be there for 24 hours, I will be ready.

Any fan interaction that you can share with us?
Recently we shot a cricket scene in a ground near a school and I was really mobbed by the students there. After pack up there were students who just came into my vanity van for my autograph and they were literally pushing my car.

Since you have said that you are different from Gopi, how difficult was it to get into the character?
I would like to put it this way, I am like Gopi but there are certain things in Giaa that is missing in Gopi. And hence, the character was not that really tough to portray.

What is your message for viewers?
I thank all the viewers for making the show what it is now. There is something to learn from each character. For instance there is Rashi who is always there on the phone talking to her mother. This shows that even after marriage the girl is still with the family. Once a fan of mine came and told that she never used to go to the temple, but after watching Gopi bahu and her devotion to Kanha, she started going to the temple every week. I would like to tell viewers to imbibe the good things and do not get carried away by bad ones.

+ 5
9 years ago reaaly love you as gopi... hey give more interviews so that we can know you better...

9 years ago SNB is the only daily soap i watch everyday, and i must say i started watching it bcoz of Gopi.. n now its more interesting wiv ahem who is starting paying attention to his wife..
Good job keep it on...and good luck to u giaa n z entire team..

ria_1 9 years ago I think it sound really odd cos in des days noone is dat stupid who,ll be like gopi i think she is totally dumb!!!!!!! and in serial noone is even trying to educate her that is the main priority.

+ 5
9 years ago you are too sweet obedient bahu. give it some attitude girl...lol.

9 years ago "Gopi is back in the house because of Naani and now Ahem also has started talking to Gopi because of her. But at the same time Ahem still loves his ex girlfriend and I will have move out of the house once Naani goes. I do not know whether Ahem will start loving Gopi in future.".........................