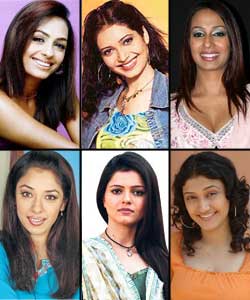 TellyBuzz had earlier reported that Imagine will be coming up with a unique chat show, tentatively titled Kya Bolti Tu, wherein the celebrity contestants will be made to answer some witty as well as personal questions. They will also be made to rate the other contestants based on the answers given.

As informed earlier, Shabbir Ahluwalia and Jay Bhanushali will be hosting the show. The format of the show will see eight celebrities (only female) on the hot seat in the first six episodes, after which there will be various other celebrities called in to participate in the theme based episodes.

A little birdie tells us that, "The shoot for the show started yesterday, and the line-up of contestants to participate in the chat show is getting finalized. As of now, Karishma Tanna, Ragini Khanna, Rubina Dilaik, Ashita Dhawan, Rupali Ganguly and Kashmera Shah have been finalized. The channel and the production house, Big Synergy are looking for more big names as contestants".

We hear that biggies like Sakshi Tanwar, Shweta Tiwari have also been approached for the same.

When contacted, Ragini Khanna and Ashita Dhawan accepted that they are part of the chat show. Karishma Tanna too confirmed the news but asked us to call later.

Rubina Dilaik said, "Yes, talks are on for the chat show. But nothing is final as of now".

We could not get thro' to Kashmera Shah and Rupali Ganguly.

Sanayaa 10 years ago OMG...Ragini in a chat show dying to see her...

sanishkm 10 years ago All the very best Rubina....

kritika_karan 10 years ago Go Ragini...will watch d show only for u...