Dolly Bindra is back again on television, after her fiery stint in COLORS' Bigg Boss 4. After being offered lot many roles by the leading GECs, Dolly has decided to step into Imagine's Armanon Ka Balidaan, where she will be seen playing on over bearing character, Kabootari Maa. She will play a crass mother-in-law, who refuses to accept her son's wife, and is only convinced to do so in lieu of a hefty sum of money. At the end of it, she still vows to make life hell for her daughter-in-law. 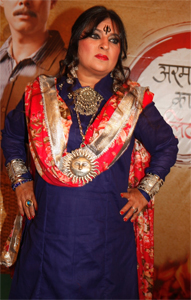 Here is Dolly talking to TellyBuzz on her new role..

You were offered lot many roles after Bigg Boss. What made you choose Imagine's Arakshan?
Frankly speaking, I was offered as many as 25-30 roles after Bigg Boss, but Imagine was the first channel to approach me. The character of Kabootari Maa is very good, and I liked it when I was given the very first brief. The production house approached me, and felt that I was the apt person to essay this role. At that time, I did not even know that I was scheduled to go back to the Bigg Boss house. I had to take it up only after I got out of the Bigg Boss house.

I was noticing the reactions of the entire media gathered here, when my screen name in the show was announced. The word Kabootari Maa gave a startling expression to one and all assembled here, and this is the vibe I was looking for. I consider the press gathered here as the junta, and I now know that the viewers will look at this role with all curiosity.

There is a buzz that you have charged a huge money of 1 crore for this show..
See, this is something that is between me and the channel. I am not doing social work for sure, and I am here to make money. I am doing my work, and they are paying for my work, as simple as that!!

You were in the news recently for accepting to play a role in Zee TV's Ram Milaayi Jodi..
Let me first clear the air that I did not sign any contract there. I do not understand why the channel made such a huge publicity of it. I did not appreciate it at all. If I talk to the channel people on a daily basis, it does not mean that I have accepted to do the role.

We heard Sony has offered you Maa Exchange too?
If I take up that show, I will definitely tell you. I have not seen the show, but I have managed to see the English version of the show, 'Wife Swapping'. If I need to do that show, I need to ask my husband (laughs).

Coming back to Arakshan, describe the character of Kabootari Maa.
She is a very powerful and strong lady who will never accept any wrong doing. In fact when I got a brief of this character, I could not stop my laughter; it is seriously interesting.

Do you think with your entry in the show the TRP will increase?
What is the full form of TRP? I do not even know that.. I don't care about TRP, it is never my concern. I have to concentrate on the role given to me, and I am doing that.

The promo that is on air of Kabootari Maa is horrifying.. What do you want to say on this?
We are not making a Ramsay film over here. It is a nice show, and I am here to have fun. If I am playing the character, viewers are bound to have all the fun (smiles).

Did you ever think that you will get so famous after your Bigg Boss stint?
I was not even guaranteed of staying for long in the Bigg Boss house. So what will I tell you now? I can only say that I am lucky to have been getting lots of offers.

What did you do after Bigg Boss?
Well, I went to Shirdi to seek blessings of Sai Baba on the occasion of my birthday. I visited the Golden Temple.

merijaan7 10 years ago She is horrible, so ugly and fat. No more ladoo's for her.

ninoshkasen123 10 years ago After her hurricane like performance dolly will now be seen on Armaanon Ka Balidaan a show on Imagine TV. She will be playing a key role of Kabootari Mai who looks very scary. Check out the promo guys…she's back!!! Tonight 7:30 PM..

+ 5
10 years ago ewww i hate dolly!!!!! stupid ppl giving this disgusting person offers for shows! this is sad.... what has happened to indian tv! YUCK!

10 years ago Seriously*
Feeling Sorry for entire Cast and Crew

+ 2
10 years ago Oh Boy!!
Dolly Aunty...*Blush,cry,die*
Just when i thought that the television screen would be arid without your GAUDY presence...you came back on the television to bliss our DULL lives with such subsistence.

and..and..and... Do I need to mention how BHOOTIPHOOL you look in this picture....with all that "trishool" bindi and "suraj dev" accessory. *Swoons*.

An innocent PHANGIRL query: WHY,O WHY do you have to display your "fashionista' skills" in public ??You have the ability to cause some fatal damages ,I hope you know that. *Batting eyelashes*

+ 5
10 years ago swriously this women is sth i hate to the core.. pure ughh by gd

+ 2
10 years ago How does a serial about quota system have such a character??

And how can they pay her so much??No one wants to see her!!!!

10 years ago iski tho nikal padi after BB...chaandi hain this weird woman ki...

+ 2
10 years ago Feel sorry 4 d entire unit of dis serial...but as dis isn't BB maybe her behaviour will not be tolerated on d sets!

Sad dat d media is giving her so much of importance nd indirectly encouraging her behaviour!!!