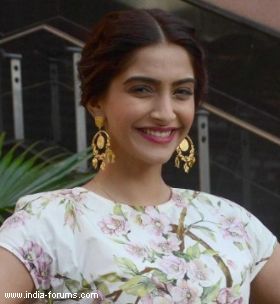 Actress Sonam Kapoor's career has never before been in a better space. Proof of her escalating equity lies in her latest acquisition - Sooraj Barjatya's next film.

The actress has put an end to months of speculation regarding who would play the lead with Salman Khan in the latest Barjatya saga.

"I was in negotiations with Sooraj-ji for the last four months. We've finally worked out all the modalities. And, yes I am doing the film. I'll be getting into the film as soon as I finish shooting Arbaaz Khan's 'Dolly Ki Doli'," Sonam said.

With Sonam stepping into Barjatya's film, the project finally seems to have found its bearings. One hears Sonam would be presented in the film as a typical Barjatya heroine a la Bhagyashree in "Maine Pyar Kiya", Madhuri Dixit in "Hum Aapke Hain...Koun", Karisma Kapoor in "Hum Saath-Saath Hain", Kareena Kapoor in "Main Prem Ki Diwani Hoon" and Amrita Rao in "Vivaah".

After delivering an impressive performance in Aanand Rai's "Raanjhanaa" last year, Sonam says she is excited about the new challenge.

"I've grown up watching Sooraj-ji's films. To be actually working in his film is a very exciting prospect for me. It's double exciting as I'll get to star with Salman Khan for the second time," said the 28-year-old.

Sonam started her career with Salman in Sanjay Leela Bhansali's "Saawariya". She recalls the association with much fondness.

"People seem to remember that I was paired with Ranbir Kapoor in 'Saawariya'. They forget my character was actually in love with Salman's character. In fact, my character chose to go with Salman rather than Ranbir in the end. Salman and I had shot together for 'Saawariya' for 31 days," she said.