Pravesh Rana who was one of the finalists of COLORS' Bigg Boss shares his excitement, nervousness and fun plans as he readies himself to host the kids' reality show on COLORS, Chak Dhoom Dhoom. 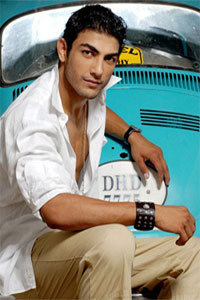 You have been associated with Chak Dhoom Dhoom from the time of auditions, so how has the experience been?
The experience has been amazing. We traveled all across the country and have selected the best 30 participants after auditioning thousands of children.

During auditions how difficult was it for you to console the disappointed kids?
It is always very depressing to see kids cry, and I too faced the same, but then I couldn't show it off on my face. At the same time convincing kids, boosting up their morale is not an easy task, but then I used to console them with lighter statements and help them get into a positive frame of mind.

Things would get more difficult when the main competition begins, so how are you planning to cope up with that?
Basically this is what I'll be there for. And pre-mind sets never work with kids; so my ultimate task would be to explain to the kid that it's not the failure of his/her talent, and to always remind them that they are the chosen 30 from 1000 that were auditioned.

Your first reaction when you were approached for this show?
I straight away said yes.

How's your rapport with the kids?
I love kids. I somehow feel that I can always get down to their maturity levels and have fun with them. That's also a reason why I accepted this offer.

So now that Saloni Daini will be co-hosting with you, what kind of excitement do you feel now?
Saloni is another element in the show. And she has her own style and strengths, so I feel her presence will be an add-on on to the entertainment quotient on the show.

This is your debut on television as a host and Bigg Boss has already created certain perceptions about you in audiences' mind, so any preparations to give your best shot as a host?
Some kids had entered the Bigg Boss house also and we had lots of fun. Irrespective of whether it's my first show or second, I always believe in giving my best in whatever I do. And I'll try to be myself in this show.

People have had lot of negative perceptions about you after Bigg Boss, so will they see a new side of you in this show?
Obviously, this show is far more different from the previous show and in a house arrest like scenario, people at times tend to react in a way you don't in your normal life. So I feel people shouldn't create reactions depending on those reactions. It was a mad house I would say.
But this is about national kids' talent, so it's a different experience and I feel happy to be a part of this.

How much are you into dancing? Are you a trained dancer?
No I'm not. But I'm surely going to learn some of it from these kids on this show. They are just fantabulous.

So if you had an opportunity would you have participated in a dance reality show at your tender age?
I would have surely participated. I feel if you are passionate about something, then one should do everything possible to achieve and make it a reality.

As there are so many kids competing with each other what message would you give their parents?
The only job for parents is to support their kids morally, emotionally but not force the kids for any activity they are not interested in.

Form of dancing that kids portrayed in auditions?
Everything, you name it and they did it very smoothly and with full passion.

So would we be seeing Pravesh Rana dancing on the show too?
Yes, why not, I will surely dance but portray more of anchoring skills.

So how much fun are you planning to have with these kids on the show?
I would say I'm a grown up kid (laughs). And I feel when people live with lot of seriousness it becomes difficult to survive. So, one should always keep that kid alive within him..

I am looking forward to this show.