View Profile
Mumbai, January 18th '10: Keeping true to its tradition of bringing something new and exciting, COLORS India's No 1 General Entertainment Channel, today announced the launch date of their electrifying new show 'IDEA National Bingo Night'. Superstar and the original Aarami Abhishek Bachchan will be the host and your date every Saturday night starting January 23rd, at 9.00 pm only on COLORS. The launch Episode will have Mr. Bachchan as Abhishek's special guest for the evening. So all you need is a big, comfortable sofa and some 'aaraam' to sit back, enjoy and win lots of exciting prizes week on week even in the comfort of your homes.

Speaking about the show and Abhishek, Ashvini Yardi, programming head of COLORS said, 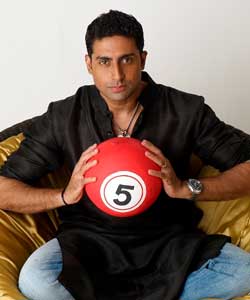 Featured Video
"National Bingo Night is a fun-filled concept which has tasted a lot of success abroad and has now come to India to entertain our audiences. The most unique aspect is that even the television audiences can play the game in real time. Also, having the Junior Bachchan hosting this show makes National Bingo Night the perfect ingredient for a fun-filled Saturday. With this show we plan to add variety to our weekend programming. You will witness Abhishek in a new endearing avatar that the audiences will surely enjoy with an exciting game of Bingo."

IDEA 'National Bingo Night' is a show that combines the energy and drama of a nationwide television event with an air of celebration that brings in together our Host Abhishek Bachchan's close celebrity friends, masti, music, along with the simplest and most interactive game in the world - 'Bingo' . Apart from lots of gup shup there will be two fast paced rounds of the number game Bingo played by the studio contestant or Abhishek's guests, driven by numbers drawn from the 'Bingo Bubble'. The studio audience meanwhile has to predict the numbers and match them with the tickets that will be handed out to them. This is a show where not only the studio contestant but also the television viewers will participate in real time and win lots of exciting prizes week on week. To add to the fun, the show has a 'Bingo Buddy' in the form of the cute-as-a-button Ali Asgar who keeps a check on all the 'Bingo Bombs' in the audience. 'Ali Baba' as he is fondly referred to by Abhishek Bachchan adds the 'Masti' to the whole episode in his various avatars.

Describing the show further was none other than the newest celebrity on the television block, Abhishek Bachchan said, "The sheer simplicity of the idea and the fact that this show is highly interactive is what attracted me to it. Winning here is easy, you need not answer any difficult questions or perform any strenuous physical tasks. The idea is simple- leave behind all your worries, relax and enjoy. It's all about making your Saturday nights entertaining right in the comfort of your own home!"

Talking on adapting the international format in India, Nachiket Pantvaidya, Managing Director, Fox Television Studios India Pvt. Ltd said, "We are excited about getting our international format, National Bingo Night, to India on Colors. We bring together a unique and a first of its kind interactive game format that gives the audiences both in studio and watching the show in any part of India an opportunity to win fantastic prizes with no effort. We have enhanced the format with music, dance and a host of celebrities and is sure to resonate with the Indian audiences."

Incase you are wondering how TV audiences can get tickets? All they need to do is check the day's leading papers for their tickets, or SMS for tickets. Alternatively, tickets can also be downloaded from the show's website http://www.bingo.colorstv.in/. It's a game where not intellect but lots of aaram and good guesswork in a relaxed frame of mind determine the winners!

There's lots of laughter, cheer, some mind-blowing performances and a game show, all rolled into a single hour of entertainment every Saturday night!

Shrestha53 12 years ago How can I avail tickets for Bingonight. of Colorstv

12 years ago guys i would love to see the show forum section for this....
this show gonna rock man

ajaysavant 12 years ago How to participate there in the show?

+ 5
12 years ago Thanks! I was so upset I missed the shooting for it by a day, I was in Udipur where it was being shot but I flew out on the day the shooting was happening!!!

the stars who'll come are good too!

reality 12 years ago looks like a lovely show by reading the article i am surely looking forward to see the show bu the way i wanted know the concept of the show.