Known for his Kamla ka hamla, the funny man, Suresh Menon radio jockey and anchor of television comedy shows is finally going to play a lead character in Krazzy 4 as a dumb guy. He speaks more about his role in the movie and his future plans with our reporter Binita.

It is a story about four patients - Irrfan Khan, Arshad Warsi, Rajpal Yadav and me. They have some mental problems and are treated by a doctor (Juhi Chawla).One day she takes them to a cricket match what happens after that is what the film is all about.

What is the kind of role that you would be playing in the movie? 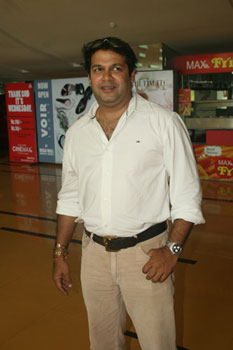 Featured Video
entally challenged and very insecure, he can't bring himself to say what he wants. It is a very interesting role and is different from what I have been doing on television. I also liked the character because of the fact that it is not a very animated character. In this film I have done more of subtle comedy.

How difficult was it to play a dumb character as you are known for talking your heart out?

I have been a great fan of Charlie Chaplin's silent films as I always believe that silence speaks a lot. So when this role was offered to me, I grabbed it as I personally feel that one can do a lot of comedy with silence. I have enjoyed throughout the film and I feel I am happy. I think I have played myself you will see a lot of Suresh Menon in the character.

What would you say about the cast if you were to describe each of the actors in one sentence each?

Irfan Khan - the world's best actor, I would say.

Rajpal Yadav - A bundle of energy and huge body of work behind him. Well on the sets none of us were competing with each other it was a complete team effort. We have made an entertaining film for the audience

What are you expectation form Krazzy 4?

As far as film is concerned I wish the film does really well and also I wish to hike the amount i charge for my movies.

So do you want to join the league of highest paid actors?

If my film really does well then I would charge 4 crores!

Share with us, your journey from radio to television and now to movies?

Well I think it has been a long journey for me from television to films. I am one of the actors who has done television, films as well as radio, so I have my hands full and I am enjoying this run. Krazzy 4 is one of the best films that I have done and I am looking forward to it mainly because it is a film where I am a playing a lead character. So for me it's an important film.

who has done a better job with the item numbers, Rakhi, Hrithik or Shahrukh?

All the three are really good but I think above all of them is Shahrukh as some how I think whatever he does is so good.

Your plans for the future?

I want to be a one stop entertainment shop. I am happy with what I am doing, everything will continue as it is after this film, be it television or radio. My ambition in life is to come up with a 24 hour comedy channel and I am already working towards it.

Hope the one of its kinds 24 hour comedy channel gets launched soon before other media houses come up with the idea!