It was another shocking elimination last Saturday on Indian Idol 4 with one of the favorites Mohit Lalwani’s ouster. The young boy had tried his luck for the fourth time in Idol, but could not succeed in achieving his dream. Mohit was voted out by junta earlier, but got back into the race thro’ Wild Card. 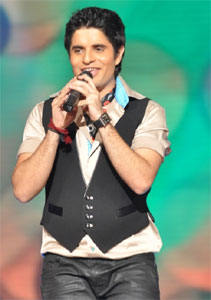 Featured Video
“Though I am out of the show, I can say that I have not lost the battle yet, as I know I will rise again and will grow in the same field. I will sing and I’m confident about that,” says Mohit.

He had appeared in the show before. “I was there in all three seasons of Idol, but only in this season, I was able to come till the gala round. I am satisfied with my achievement, and will come back to Mumbai and make my career in music and singing” he adds further.

Talking about his journey the singer explains, “Though I could not win the coveted title, it was a very nice journey as I fulfilled my dream of making it to the Gala of Idol. I’m taking this loss in a positive way. I will miss this stage and my friends, especially Prasanjeet, Torsha and others. Prasanjeet has been with me since start, and we will remain good friends in future too.”

What according to you went wrong and resulted in your eviction? “I really don’t know as I have always been doing well in the show. I think audience must have thought that I’m a good singer, so I will get my share of votes anyway”.

“My mother was there for my moral support. The day before the eviction she came to see the shoot, and unfortunately I was out the next day. She came on the stage and hugged me and was proud of me,” he adds further. From early childhood, Mohit was inspired by the singing skills of his mother who dreamt about a career in music industry.

Besides completing his graduation, he has also completed Music [Hons] from the Music faculty of Delhi University. Mohit has shared his silky, soft, touchy voice with renowned singers like Sonu Nigam, Sunidhi Chouhan, Mika and many more during many stage shows/ live performances. During his college life, he has won many prizes and awards for his singing skills.

When asked of who should win the title of Idol, his immediate answer was, “It should be Prasanjeet as he is the happy-go-lucky kind of person. The same thing can be heard from his voice too.”

Though there is still time left for the finale of Idol, let’s wait and watch to see who takes the title.

+ 4
13 years ago Awww I really miss Mohit! Along with Rajdeep, he was my favourite.

+ 2
13 years ago He was an ok singer pretty ugly though lol,but Remo should''ve been out a while ago he''s the worse singer compared to all of them!

+ 4
13 years ago Im so mad. I love Mohit- this isnt fair! He had an amazing voice. So did Ananya, Priyanka, and all the other ousters.
Pathetic.

13 years ago Indian Idol has no hopes...
Before you know it...Remu will be declared THE INDIAN IDOL...
Mohit was one of the consistent singers with a great voice and an awesome personality...Its such a pity that he went out...

13 years ago the talented, and the one with looks and personality is out.. lol.. greatd.. so happy..!!