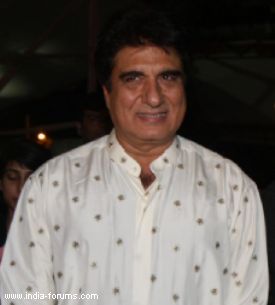 Actor-politician Raj Babbar says he was not being high-handed when he questioned police officials for videographing him as he was "informally" addressing "my party colleagues at a private gathering".

According to reports, the Congress candidate for the Ghaziabad Lok Sabha constituency in Uttar Pradesh near Delhi, lashed out at the police while addressing a gathering in a house in Vijay Nagar in Ghaziabad.

The video footage captures Raj Babbar shouting angrily. The Ghaziabad police has taken strong exception to his outburst and an investigation has been ordered into the matter.

However, Raj Babbar has a completely different story to tell.

He said: "When I asked the cops why they were videographing me, I was not being high-handed. I was making a legitimate point. The Election Commission rules that public speeches of election candidates be videographed. But I was not in a public place. I was at a Congress corporator's residence and the law under Section 144 did not apply there.

"I was informally addressing my party colleagues at a private gathering and not making a public speech. There was no public address system, no loudspeakers. It was just me talking informally with my colleagues. They had no right to videograph me."

He alleges that the incident took place at the instigation of an individual from a rival political party.

"Close to the home where I was addressing my colleagues from the Congress, there is the residence of a Samajwadi Party politician. He informed the cops about my presence. I am one of the most law abiding politicians in the land. You won't find me in any scuffle anywhere. This whole thing has been blown out of proportion to malign me.

"There are many political elements from rival parties in around my constituency who can't digest the fact that an honest politician can do his job sincerely and effectively and still be elected from the same constituency four times."

Babbar says his fight is not for power.

"I am here as a politician not because I want to use this platform for monetary and other benefits. I am here to fight for the rights of farmers. I've taken on the most powerful business lobby, of the Ambanis, and the very powerful political lobby of the Samajwadi Party in Uttar Pradesh. My fight for famers is to the finish," he said.

One of the first few Bollywood personalities to enter politics, Raj Babbar is happy to see so many of his colleagues joining politics.

"There was a time when only the intelligentsia -- lawyers, doctors, teachers were allowed into politics. Now the spectrum of professionals in politics has broadened. Today, politics needs dynamic professionals from all walks of life.

"I am glad my colleagues are coming into politics. It wasn't me who started this influx from show business. Before me there were distinguished actors turned parliamentarians like Karunanidhi, MGR, Sivaji Ganesan and Jayalalithaa."

"Dutt saab's honesty, integrity and ideological firmness made him a role model for all future mergers between the entertainment industry and politics. If I can achieve even a fraction of his transparency in politics, I'd be happy."

"Besides me there is Rajesh Khanna, Shatrughan Sinha, Jaya Prada, Hema Malini...I think all these personalities from cinema prove there's more to show business than just show."

He will be stationed in Ghaziabad until elections. His two sons Aarya and Pratiek are expected to join him for the election campaign.

"They are busy with their lives. I've asked them to join me. If they come I'll be happy. If they don't I'd still be happy," he said.