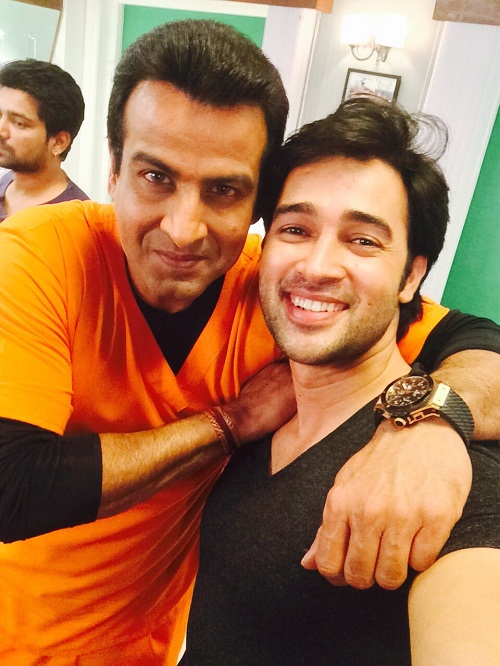 Karan Sharma, who was last seen in Sony TV's Ek Nayi Pehchaan received a lot of acclamation and accolades for his chocolaty boy stint in the show. Well, the actor is currently on a sabbatical and is making full use of the break that he has got. TellyBuzz had earlier reported about the actor going to Durban and also about a few memorable moments he would cherish forever.

Well, the latest update about the actor that we have received is that he had visited the sets of Meri Aashiqui Tumse Hi to meet his dear friend Shakti Arora. The two were together in Zee TV's Pavitra Rishta. But like its rightly said, surprises are something that can come your way anytime. Something similar happened with Karan too. He accidentally happened to meet Ronit Roy (worked together in NDTV Imagine's) Bandini. What happened next is something that Karan himself can tell us.

Thus when contacted, Karan excitedly averred, "I went to meet my good friend and Pavitra Rishta co-star Shakti Arora, while he was shooting for Meri Aashiqui Tumse Hi airing on Colors. There I came to know that Ronit Roy Da too is shooting nearby for his upcoming show Itna Karo Na Mujhe Pyaar and hence I decided to catch up with him. I wished him for his upcoming show and also confessed to him that he is looking dashing as ever. I learned a lot while we were shooting for Bandini together, where he played the role of my grandfather. Ronit Da is not only a great actor but also a wonderful human being. His aura is so positive, I feel blessed that I got an opportunity to share the screen space with such an amazing star. Meeting Ronit Da was definitely not less than a surprise to me. I was so enthralled to meet him."

Good to see Karan so happy to meet him!!!!

6 years ago Aaww that's sweet! Both Karan and Ronit are good actors