Claudia Ciesla, the only Non-Indian in the group of thirteen contestants to enter the Bigg Boss house talks about her journey in the house and much more… 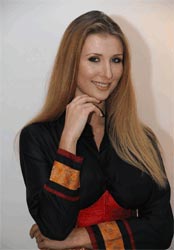 What is the one thing that you miss after getting out of the Bigg Boss house?
I miss the entire atmosphere of being in the game, the tasks, jail life and the experience of being part of all the discussions and strategies. I am happy that I stayed in the house for 10 weeks. I am now slowly getting back to the normal routine of life.

What was the reason to get into Bigg Boss house?
Bigg Boss is a show that is very famous, so I did not give it a second thought at all. Above all, Mr. Bachchan hosting the show made it special. I have got lot of offers after coming out of the house, and this speaks volumes about the popularity of the show.

Do you think you faced lot of difficulties because of lack of communication?
Yes, I did face a lot of problems initially. For a month I was allowed to speak English, but later on I was also told that I had to speak in Hindi only. By then I could very well understand what people were talking, and could make out if anyone was bitching about me.

One of the house mates commented that you don't know your National Anthem?
See, culture differs from country to country. We never got taught in the school as it was not very important. However, it does not mean that if I don't know my National Anthem, I am not respecting my country.

You were having a great time with Pravesh?
Pravesh is a very good friend, and we understand each other very well. There's nothing more to it.

Which inmates will you stay in touch with after Bigg Boss?
I will be in touch with all inmates. We are planning for a night party after the Finale, for which I will invite everyone.

What is the most memorable thing that happened to you in the house?
Everything was memorable, but the jail experience was out of the world. There were lot of insects out there, and it was difficult for us. We all cried when we were in the jail. Apart from this, I learnt to cook Indian food, and also learnt yoga.

What about Kamal Khan's behaviour in the house?
When the show started, Kamal was simply acting; he was not there to win and just wanted to promote his film. He got very irritating as days passed by. I was really annoyed with him, and wanted to kill him. But when he made his come back, we were all shocked. But trust me, he showed us his real self and was so good and understanding.

Life after Bigg Boss?
I am searching for an apartment in Juhu or Bandra; I also plan to take proper Hindi classes. I have already got an offer for a Hindi movie for which discussions are on. I want to create an image for myself in the industry.

According to you which contestant has the best chance of winning Bigg Boss?
I think Vindoo has the best chance. Even though he got nominated many a times, he has got a strong support outside. Pravesh too is playing the right game.

How was your interaction with Mr. Bachchan?
It was a nice feeling to be interviewed by the legend himself. He is so strong and powerful, and interacting with him was a life time experience.

11 years ago i like listening to her hindi..:) she has learnt remarkably fast...gud going gal!

+ 5
11 years ago she's sweet...hats of to her for learning hindi in a month..mus hav been hard living in big boss at the start