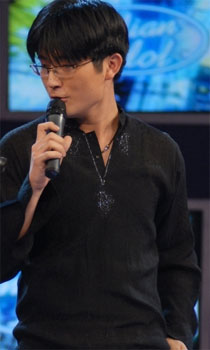 Meiyang Chang, the third generation Chinese who is settled in India is a dentist by profession and is one of the most popular contestants in Indian Idol, both for his looks and his singing capability. He is already one of the top contestants on Indian Idol. This simple, easy going boy with an Indian heart strongly believes that he can keep the audience entertained. He has never taken any formal singing training, according to him he has inherited his “singing genes” from his father. His hobbies include reading, acting in plays, photography and making cartoons. Telly Buzz takes you into the world of the Multifaceted Meiyang Chang who now aspires to make it big in Indian Idol.

How has this platform been beneficial to you?

Chang: This is extremely different; I had no big music background to bank on. I used to sing, but my voice had never reached the public. But now, with Indian Idol, things have changed. I always had a definite goal in mind, I wanted to do something else apart from my main career as a dentist. Indian Idol helped me to focus on music and has given me a good break into singing.


Chang as a Dentist or Chang as a singer – which one do you prefer?

Chang: At the moment, focus is on Chang the Singer. Chang as a singer has to improve a lot more. Only then, will I really deserve to get anything big in music. I am working hard, hopefully things should fall in place.

How does it feel to have such a huge fan base?

Chang: The feelings are mixed. At times, it is very nice, but at the same time, it is awkward and embarrassing too. But there is one thing I have noticed, whenever I am out, I have seen people seeing me, and commenting that I look like Chang. (laughs). Its very rare that they recognize me, maybe it is my Chinese look that confuses all. After all, all Chinese people look the same. Overall, it is a very nice feeling to get so much of support from friends, relatives and my fans. It feels great to see that you are appreciated a lot.

When you came to Indian Idol, did you think you will ever reach to this level?

Chang: Not at all, I was confident that I will never clear audition stage in the Piano Round. Once all that happened and I moved further up, my confidence in myself increased. Today, even though there are better singers in the contest, I feel lot better, as I know that I can make my mark and do something good and nice every time.

Who gave you this inspiration to be a singer and that too in Hindi inspite of you being a Chinese?

Chang: I would say, it was my Dad who gave me this much needed push. He sings Hindi Ghazals and old Hindi Songs. I used to listen to these songs on radio along with him. He has always been my inspiration. Although western music and fast songs are liked by all, the moving music has always appealed to me. I am actually more comfortable in Hindi than any other language. 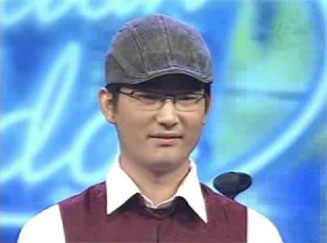 You have an impeccable pronunciation in Hindi. Your comments on this..

Chang: I remember one incident; when I was in 9th, my Hindi teacher gave us a spelling test. I got full marks and the teacher was really happy and praised me that I did well, inspite of the fact that it was not my mother tongue. This lit a bulb in my head and I really worked hard to get a hold on ‘Shudh Hindi’. From then, I would always write down the tough words and then get to the meaning of it. Today, all the hard work has paid off.

How was it to sing before Sonu Nigam?

Chang: It was really awesome! I am not a big fan of his, but OMG, this was the reaction when I saw him. Standing in front of him and singing was a great opportunity. He is a very tough judge to impress, he might not tell you the feedback rudely, but he is very frank. I was really happy to meet him backstage. I was in awe of him and kept on telling ‘You are the King’.. I really went crazy.

Imagine you have won Indian Idol II3. What’s the first song that comes to your mind to describe the immediate feeling you will have when you win it?

Chang: I would be really happy if I won it. At the same time, I would love to be sober and down-to-earth. The song I would sing after winning would probably be ‘Yahoo, Chahe Koi Muje Junglee Kahe’..

Indian Idol is at its final phase right now and we wish the Hearthrob of Girls, Meiyang Chang a Great Future...

+ 3
14 years ago chang is adorable!
thanks fro the great article

14 years ago Very good interview. Chang is capable of cracking jokes at himself. He knows his strengths and weakness, this will take him far and wide.

GOOD LUCK TO HIM!

14 years ago He's really sweet and down to earth. he deserves to be in the top 3 at least.