View Profile
The buzz in the town is all about the reality show on COLORS,  Chak Dhoom Dhoom which recently saw a controversy with regards to one of the judges. It's just been a week since Mallika Sherawat was publicly announced as one of the judges on the show.. And it did not take a long time for the channel and production house to dump the 'Item Girl' and get a better  dancing talent to judge their show.. 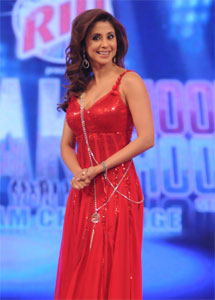 Yes, we are talking about the 'Rangeela' girl Urmila Matondkar who has been in the news  for having replaced Mallika Sherawat as the judge in Chak Dhoom Dhoom Team Challenge.

Here is Urmila talking about her new-found role on television...

You are coming back after a long time on small screen, what made you to take up this role of Judging?
Well, I have always done something different and this is for the second time I will be judging a reality show. But this is a different experience altogether. When you are part of a celebrity  reality show, you are put in a spot of bother where you do not know how to judge the popular faces. But this concept is very different, and I feel it easier when it comes to judging a group performance. It's always tough to judge a solo or a duet performance, as you have to keep a note on all the steps and expressions..

Did you expect that such a show will come to you?
No I never expected to get called for Chak Dhoom Dhoom. I guess they wanted someone from the field, who is known for his/her dancing skills. I think they felt I would fit the bill perfectly.

Have you interacted with the other two judges, Terrence and Javed before?
I have come across both of them. I still remember Terrence; he was choreographing one of my performances in one of the International festival of Cricket. The performance included many  different dancing styles and he was behind me to do all the innovative dances as he felt I could do justice to all the forms. And talking about Javed Jaffrey, he is quite a witty dancer of our industry and I  share a good rapport with him. So I think we are going to rock the floor of the show.

According to you which dancing form have you disliked and had a tough time rehearsing it?
It's impossible for a person to be perfect in everything. I have always felt that every dancing style comes with a lot of practice and one has to rehearse to the core to get it perfect.

What would you say about the fact that you have replaced Mallika Sherawat?
I don't think I have replaced anyone as I will be seen in the show from the gala episodes till the end of the season. So there is nothing like I will be replacing anyone. I think the channel wanted someone who has a dancing background and they found me as the perfect person.  They approached me and I was happy to accept the offer. It would be great to judge a show with a new concept of group dancing which has various styles in it.

Who is your favorite dancer from the industry?
Its very impossible for me to answer this question because Saroj Khan, Ganesh Hegde, Ganesh Acharya, Shiamak Davar, Prabhu Deva have their own dancing styles and I am not being diplomatic. But I would love to dance with Prabhu Deva.

Who are your favoruite actor and actress?
My favorite actor is Shah Rukh Khan and actress is Madhubala.

One horrible experience you had while dancing?
I never had a horrible experience because each time I have to do something new; it's always hard work for me. But I remember that while I was shooting a song in water for Mehbooba Mehbooba, I had to be in water on my toes, and had to turn my leg fully so that the leg, thigh and hips twirled. It took me almost two days to perfect that step. And believe me,  I was just turning and twirling in water till I got everything right.

How will you judge the dance? What aspects will you look into?
Well, there are many such aspects which I will be looking at. As I said it's going to be group dances and it's very hard for a single judge to handle it. So I will be looking after the expressions, foot work, the grace and everything that comes under perfect dancing.

What is the difference between Judging Jhalak Dikhhla Jaa and Chak Dhoom Dhoom?
Jhalak Dikhhla Jaa is judging celebs who are not professional dancers; they are actors who perform while managing their daily schedule of work. It sometimes becomes very tough for us to judge them and I used to wonder how to rate them as there was no style or form seen in their dance. Even then, we had to be diplomatic in our markings and comments.  It was really pushing me at times. But here all are professionals and I have to judges them properly with all the technicalities and grace. I won't be put in problem here. True judging will be seen here.

Will the audience see you shaking legs in the show?
Yes, of course but I don't think I will need to dance as audience has seen me dancing before..  And I think the participants will dance so superbly, that they will make us come to the stage and shake a leg.

can't wait to see u back onscreen

11 years ago i hope they make a good movie.. thanks for sharing..

11 years ago Thanks for sharing!
very interesting!

+ 3
11 years ago Uffff
It sounds good but its something like Benjaman eh!!

+ 3
11 years ago thanks. this is very neat and interesting!

+ 2
11 years ago thats like that movie w/ Robin Williams...I forgot the name of it, but he ages wayyyyy faster than kids his age.