Action hero Akshay Kumar says he helped co-star Deepika Padukone match his action skills in their forthcoming film 'Chandni Chowk To China' but made sure she came 'second best' to him. 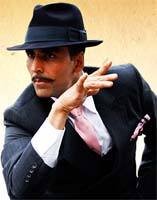 Featured Video
'She (Deepika) once said she wants to be the female Akshay. I hope she doesn't beat me. She has done a good job in the film and I helped her here and there. That way I made sure she always came out second best to me,' Akshay told IANS in an email interview.


Though Akshay was slightly apprehensive in helping Deepika considering 'how good women are at picking up skills', he was quite sure he wouldn't be 'outshone' by his leading lady.


'Chandni Chowk To China', slated to release Friday, features the two actors in a story of an Indian cook, Sidhu, played by Akshay, who goes to China and is mistaken for a martial arts expert.


The film is apparently based partly on Akshay's own life as he was also born in Chandni Chowk in Delhi and grew up to go to Bangkok to work as a chef.


About his character in the film, he said: 'I love my character. It's so much like me. Come to think of it, Sidhu is a man I was once in Bangkok. Though the purpose of the journey is different but the drama is definitely the same. I have fought as many villains in this movie as I have in my career.'


'Chandni Chowk...' is being talked about for its aggressive promotional activities as well as for the association of international names like renowned Chinese actor Gordon Liu and action choreographer Dee Dee Ku.


For Akshay, training under Ku, who has worked for films like 'Kill Bill', 'Crouching Tiger, Hidden Dragon' and 'Matrix' among others, was like 'squeezing blood from a stone'. 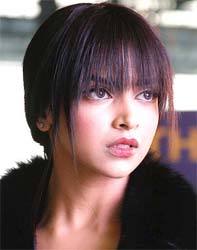 'He is super quick. Whenever he would have crazy stunt ideas, one couldn't figure if he was serious or joking. He is incredible in his field. And I trusted him with my life.


'If I would have met him before, my life would have been different. He has only worked with the best. So pleasing him was like squeezing blood from a stone. When he used to say 'Akshay the take is okay', that used to be a huge compliment coming from him,' he said.


Sharing screen space with Gordon Liu was like a childhood dream come true for the actor.


'You know how fans react when they see Aamir Khan and how they run behind him. That's how I see Gordon Liu. I have admired him and his martial arts since the beginning. It was superb working with him,' said Akshay.


'Chandni Chowk...' also holds the credit of being the first Indian film to be shot at the Great Wall of China.


'We had a fabulous experience shooting at the legendary monument of the world - the Great Wall of China. It was spiritually breathtaking and probably the highlight of our shoot,' he shared.


A part of the film has also been shot in Chandni Chowk. Akshay has a lot of fond memories of the popular market place.


'Shooting in Chandni Chowk was a unique experience. I was born there. I thought it was sheer madness to shoot there in the narrow lanes but people there were overwhelming. I am an expert regarding the food available there so I used to treat the unit of the film to the best delicacies there,' he said.