'I hear some journalists back home have decided to get us married. Love and a decision to marry are very private matters. If ever there's marriage on the cards, I'll let everyone know. For now there are no such plans,' Bhansali told IANS from Paris.

Bhansali turned 45 Sunday and says his best birthday gift is the opera 'Padmavati' which he is directing for the prestigious Theatre Du Chatelet in Paris.

'The biggest birthday gift is the opera 'Padmavati'. I came here to Paris expecting to work really hard with 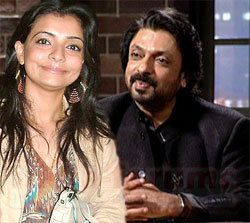 Featured Video
a discipline that I had never dabbled in before. But I didn't know that it would be so much fun,' Bhansali said.

'The French actors and the team were all prepared for my arrival. Once I arrived in Paris, I just had to fall into rhythm with them. I'm having the time of my life,' added Bhansali.

He missed his mother and close friends on his birthday. 'But my opera team just wouldn't let me get lonely. At midnight, they wheeled in a cake on a 'palki' and sang 'Happy Birthday' for me.

'I'd have been embarrassed if I wasn't so happy to have people in this foreign country make me feel at home on my birthday. Otherwise my birthdays are always like any other day.'

The director was supposed to fly back home to Mumbai on his birthday. 'But that seemed impractical. If I left the opera at this time, the entire rhythm would've broken. To watch these actors and team-members give so much of themselves to 'Padmavati' is very inspiring. I always wanted to do theatre,' Bhansali said.

'I never thought I'd enjoy the process of doing opera so much. To watch these magnificent singers hold a note for so long without getting breathless, to have them recreate the whole legend of 'Padmavati' is a process of creation that has completely rejuvenated me. I've never felt more calm and alive as an artiste,' Bhansali said.

The opera goes on stage in the next two weeks.

'I'm supposed to be physically present for the first two shows. After that when the opera goes to other countries, I'll be joining the repertory to start them off in the new atmosphere.'

So what did he actually do on his birthday?

'You mean besides work? Calls and messages from friends and relatives back home started early. I attended my costume designer Rajesh Pratap Singh's pageant at the Fashion Week. Then I walked along the Seine and just spent time with myself in my apartment here in Paris,' he said.

'In Mumbai, I don't get much time to do that. And for a slice of home I've Omang Kumar and Rajesh Pratap Singh to do the sets and clothes for the opera. I had never worked with choreographer Tanushree Shankar. Like everyone else involved with 'Padmavati', she has just fitted into the whole opera perfectly. Nothing about this opera seems out of place,' the director said.