After being in television, Ranvir Shorey has done quite a few films and made a place for himself in the favorite list of a number of directors. Currently, Ranvir is very excited over his role in ‘Mithya’ directed by his friend Rajat Kapoor. He says that he has neither done such a complex role before, nor will he be doing anything like this in future! Here are the excerpts from an interview with him.

Q: Tell us something about your film ‘Mithya'?
A: ‘Mithya’ is the story of a struggling hero who comes to Mumbai from a small town. While the dazzle of the tinsel town draws him to the city, his fate ultimately takes him somewhere else. This is ‘Mitya’. My role in ‘Mithya’ is the best that I have done so far and the credit for this goes to my friend Rajat Kapur who is also the director of the film. This is my third film with Rajat Kapur and we have already done two plays together.

Q: Why do you feel that only Rajat Kapoor offers your good roles? Your performance in Madhur Bhandarkar’s ‘Traffic Signal’ was well accepted and even appreciated…
A: When you watch you too will agree that I have done even better in this film.

Q: How was the experience of working with Nasseruddin Shah for the first time in ‘Mithya’?
A: Earlier, I had done a cameo in Naseeruddin’s film ‘Vaisa Bhi Hota Hai’. But it is true that this is the first time that the audiences will notice us together in ‘Mithya’. Naseer bhai has always been nice to me and we share a 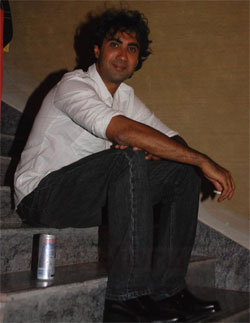 Featured Video
comfortable relation professionally. Whenever we met on the sets of ‘Mithya’ Naseer bhai talked to me very nicely , just like how old friends do. But as soon as the camera would be on, he would get into his character and become an entirely different persona. This was something new for me and I feel excited while talking to you about this even now.

Q: Although you too are a good actor, did Naseeruddin ever give you any tips on acting?
A: Nasser bhai is a treasure house of knowledge. As far as providing tips is concerned, he did not make me sit and take lessons, but he definitely provided me with details about the aesthetics of acting between shots. Now it is really difficult for me to go into the details of this aspect.

Q: What is the reason that despite doing lead roles in meaningful cinema, you are only doing character roles in commercial cinema?
A: The main reason for this is that no one will give me lead roles in commercial cinema where the hero needs to draw the audience to the theatres. Anyways, I will be seen as a main lead in Pritish Nandi’s film ‘Ugly Aur Pagli’ opposite Mallika Sherawat. I will not say that this is a commercial film. However, there is a love story in this film too, but that is unlike the ones in our mainstream commercial films. I am sure that the audience will watch this kind of love story for the first time on the screen.

Q: That means you have no problems in accepting the role of a comedian in big banner films?
A: Why, haven’t I done this earlier? I have done different roles in different films – big or small. I have acted in comedy films like ‘Khosla Ka Ghosla’ and ‘Pyar Ke Side Effects’ and now I am acting with Akshay Kumar in Vipul Shah’s commercial venture ‘Singh Is King’. I have never been concerned whether my role in the film is that of the lead actor or supporting actor. All that I have always seen is whether I like the film’s story and how effective my role will be in the film. Look, before ‘Traffic Signal’ I had not done any mainstream film, but I liked my role in this film and accepted it. It was similar in the case of ‘Pyar Ke Side Effects’ too. I like the film’s story, director and my role so much that I immediately accepted the offer. There are always different reasons to do different roles. But as far as my role in ‘Mithya’ is concerned, I can boldly say that never before had I done such a complex character, nor will I ever get to do one in future.

Q: How do you select your roles in a film?
A: Normally, I take care of three things while choosing my roles – story, director and character. But there are exceptions too and there are some films that I have accepted only because of Rajat, Vinay, Sourabh and Sagar Bellary.

Q: While choosing to act in Rajat Kapoor’s film, do you see him as a director or as a friend?
A: So far he has been a friend first for I know Rajat from the days when I first came to Mumbai. Those were the days when we all were struggling to make an identity for each of us. Since then neither have I ever asked Rajat what role he would be offering me in his films, nor has he ever asked me which character I would like to portray in his film. I like to work in Rajat’s films not only because he is a friend, but also because he is a good human being. Saurabh, Vinay and Rajat, all are very talented people and working with them has always been beneficial for me. And this is the reason why I consider myself fortunate in Bollywood.

Q: How do you like to see yourself in Bollywood – as an actor, a supporting actor or a comedian?
A: I want to be known as an actor and a good actor.

Q: You have acted with many big heroines like Mallika Sherawat, Katrina Kaif, Kankona Sen Sharma and even Madhuri Dixit. How has been the experience?
A: I consider myself to be very fortunate. Well, you are talking about my film ‘Mithya’, but did not mention about Neha Dhupia who is the leading lady in the movie. If Neha comes to know about this, I don’t know what will happen to you, but she will not leave a strain of hair on my head. And she is quite capable of doing this.

Q: In addition, you were supposed to be in Atul Sabbharwal’s ‘Junction’. What happened to it?
A: Actually, I myself don’t know much about this film. I think this film has been shelved. Unfortunately, the film was started three times and every time the producer ran short of money. However, I would like to work with Atul sometime in the future.

Q: In ‘Teesri Manzil’ Irfaan Khan will be doing an ‘item boy’ on the stage. What will you do if you get an opportunity to dance?
A: Well, even I am dancing in ‘Ugly Aur Pagli’. As far as dancing is concerned, you may call me the new Sunny Doel as I am too bad at it. I like to dance, but not in films. I willingly dance at the parties with my friends, but I am uneasy dancing to the claps of the choreographer.

Q: It is surprising to know that even after dancing with Madhuri Dixit in ‘Aaja Nachle’, you are still having problems in dancing…
A: Well, would you call it dancing? I feel there was more of dramatics than dance in that film. I just had to move in a circle and do sword fighting and I had taken one-and-a-half-month’s training for this. Once we would reach the sets, the choreographer used to say ‘Come on, you have to dance’ and began clapping and saying one-two-three loudly.

Q: Don’t you think that to become a complete actor one should be able to dance too? Are you planning to get trained in this form of art?
A: Yes, I have thought of the fact that if I want to do hero’s characters, I need to be able to dance and I will be taking training in this very soon. But frankly speaking, it is a difficult job for me now.

Q: Well, along with films do you want to continue your career in television too?
A: Yes, of course. I have never said that I have quit television to join the world of films.

Q: So, would you like to host shows or do comedies on television?
A: I will do which ever will be more interesting to me. One reason why I am not doing anything on television now is because every one concerned is asking me to do shows like ‘RanvIr, Vinay Aur Kaun’. I am totally fed up with such kind of shows. Unless, I am offered something new and challenging, I am not willing to waste my time on television.

Q: Personally, do you like comedy?
A: Actually, it is not a matter of my liking or choice. Of the 10 films that I am offered today, eight are comic roles. Hence people are of the opinion that I am doing an excess of comedy films. But contrary to this, I am eager to do serious roles and I hope I will soon get some meaningful roles.