View Profile
In an era where every actor, big or small aims to charge big money per film, all eyes are now set on making new stars. Rehan Khan is one actor who wants to make good use of this and slowly move up the ladder of success.

Even though Rehan Khan did not impress the viewers with his debut vehicle 'Jaana - Let's Fall In Love' (2006), the actor took a bold move and accepted a small, but good role in the Emraan Hashmi starrer, 'Awarapan'. 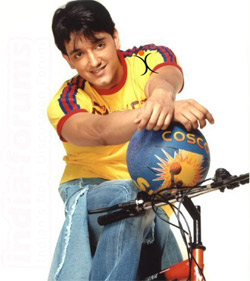 Talking about this calculated move, Rehan says, "One has to be visible in the industry. Now the choice was to either wait for a lead role with a reputed banner and risk being out of circulation, for long or keep the momentum going even if it was a small role. I chose the latter option".

Like Emraan Hashmi, this lad too is very fond of working with the Bhatts. "There was no reason why I should have refused Bhatts who have been star makers in their own rights. Also, they are very clear about the films they make and the audience they target. Even the small part I played in 'Awarapan' helped me and the result is that today, I have two films where I play lead roles", states Rehan.

Elaborating on the two lead roles he has accepted, the actor says, "The first one is 'Click', directed by Sangeeth Sivan who made the laughter-riot, 'Kya Kool Hai Hum'. But the difference is, this time he comes up with a young horror flick. Shreyas Talpade, Sneha Ullal and Sada are my co-stars in the film. The film is slated for an April release."

Well, Rehan hopes that once he clicks in 'Click', his career will go for a fast forward with his next film, 'Fast Forward'. "This film is produced by Anjum Rizvi who has made films like 'Charas' and 'Ahista Ahista' , and directed by debutant director Zaigham Ali Syed", says Rehan.

Elaborating on the story line of 'Fast Forward', Rehan states, "It is a film based on dance and has Vinod Khanna leading the star cast. Rest of the cast is quite young with newcomer girls like Sheena Shahabadi and Sabina Sheema. The film should be arriving this summer".

A firm believer in destiny, the actor concludes saying, "I will say that I have managed to take a couple of steps up the ladder. Now it is left to destiny and I very well know that not all manage to get to the top of the ladder in a jiffy. However, my future looks bright from where I am seeing it and I am sure my time would come too".