View Profile
"I was required to be in Court when the prints of the film had already been delivered all over the world. Finding myself caught in a helpless situation and to keep up my commitment with distributors and to respect feelings of the audience, I had no way but to succumb to the pressure and to compromise on the matter, thereby seeing that the film was released on the announced date and hence chose to pay the price to Ram Sampat who strangulated me just days before the release. Please do not get misled by wrongful claims and wrong impression about the intentions and integrity of a banner like Filmkraft which is sincerely and honestly serving the Motion Picture Industry and cine-goers since decades," says Rakesh Roshan when I meet him for this interview at his spacious office in the suburbs.

I ask him why he chose not to direct 'Krazzy 4'. Pat comes the reply, "To tell you the truth, I was very tired after completing 'Krrish'. It had taken a lot of my energy and I wanted to take a break very badly. At the same time, I did not want to have a big gap between my films and hence wanted to roll my next film after 'Krrish'. I had promised Jaideep Sen, who had assisted me while I was making 'Krrish', a break" 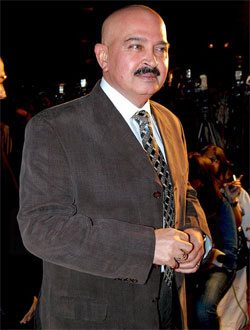 He asserts that though he did not go to the sets when Jaideep was directing the film, he was part of the whole film for the simple reason that it was made by his own office Filmkraft Productions (India) Private Ltd. "Even when I was making 'Krrish', Jaideep used to have good suggestions. I am ready to take up even a spot boy's suggestion if it is a good one. No one is a genius in this industry. You become one with success", he quips.

After 'Krazzy 4', Rakesh says that he has zeroed in on an outside director - Anurag Basu - for his next film 'Kites'. "I was working on two scripts. The first one, 'Kites', was ready. I had liked Anurag's work in 'Metro' and called for the DVD of 'Gangster', too. I called him to my office. He told me that he was keen on working with Hrithik and I functioned like a bridge since Anurag is a new director. When he told me that he did not have a subject to direct, I suggested that if he wanted he could direct 'Kites' for me".

Says Rakesh, "Anurag read the script and told me that though he liked it, he wanted to write his own screenplay. I told him to go ahead because I know that every director has his own way of narrating a plot. Everything comes from the screenplay. If the screenplay is good, an actor gets inspiration. The director's job is to take out good work from an actor. Anurag has the knack of doing just that".

'Kites' is a love story-cum-thriller. "I chose the title 'Kites' because I feel that a pair of kites on the sky reminds us of romantic pairs. Kites will star Hrithik Roshan, Barbara and Kangana Ranaut. We wanted a Spanish actress. While Barbara will speak only in Spanish in the film, Hrithik will speak in Hindi and English and hence the film will be made in Hindi, Spanish as well as English".

He adds. "Today the world is becoming smaller and the time has now come for us to make films which have universal appeal. Today 99% of our audiences know English. We should try to move forward instead of remaining stagnant."

Rakesh says that he has decided to keep the sequel of 'Krrish' on hold. "I enjoyed making 'Krrish'. As a maker I throw a challenge to myself when I set out to make a film, whether I will be able to make that film. That keeps me going till I complete it. I feel I was falling into the same trap when I was writing the sequel to 'Krrish'. I will be happy with the script only if I am able to go a level higher than that of 'Krrish'. Only then will I launch the sequel."

Rakesh says that he is happy with whatever he has achieved till date. "I have done around 80 films as an actor. I think all my films were bad or else I would not have stopped acting. Jokes apart, I can count films like 'Kaam Chor', 'Khatta Meetha', 'Khoobsoorat', 'Khel Khel Mein' and 'Aankhon Ankhon Mein' as my best films as an actor. I had always dreamt as an actor that I will have my own banner like Raj Kapoor. I launched my own banner. I plunged into direction when offers stopped coming as an actor".
Jyohti Venkatesh (SAMPURN)