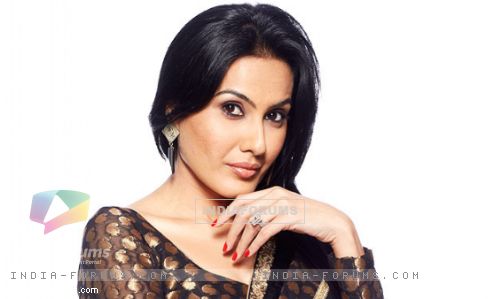 Versatile actress Kamya Punjabi who is back on screen after a sabbatical in the very popular show Beintehaa on Colors is gaining overwhelming response for her character in the show. While the actress has already portrayed a negative character before in Banoo Main Teri Dulhann, Kamya too is seen in a negative role but along with a funny side to it.

In conversation with TellyBuzz she talks about her character and more...

You are coming back in a daily soap after a sabbatical?  Where had you been all this while?

Yes, I had taken an off from television as I wanted to spend some quality time with my family. After I came out from Bigg Boss house I was keen on spending my time with my daughter. And then later I was not getting any appropriate role which I could take up. So I was waiting for the right time to come and here I am back on television.

You have been known for your vamp character as Sindoora in Banoo Main Teri Dulhann, Woh Rehne Wali Mehlon Ki and now again you are playing one of them, does it appeal you more?

Beintehaa has recently completed its 200 episodes, what do you have to say?

Though I was not a part of the show since its beginning but I am happy that the show has completed such great episodes. This show is doing really great and all the actors are doing an excellent job. I am having great experience shooting for the show.

How is your bonding with your co-stars?

It's great. All the actors are hard-working and are fun to be with. We have good time shooting together on the set. I found a very good friend on this show that is Suchitra Pillai who is portraying the character of Zain's (Harshad Arora) mother Suraiya. She is a gel person and we have a great time together on the sets.

Recently you visited Bigg Boss 8 and created a havoc in the show, people had applauded a lot for the same so how was your experience there?

It was great to go back on the Bigg Boss set. There are many memories related to the show. I was upset with the contestant's behavior as they are thinking this season is the most happening one but I would ask them to come out and see what they are doing in the house. Then it was pleasant to meet Salman Khan the host of the show, his opinions towards the contestants are so correct we can actually feel it now.

Well, Kamya you are doing great job in Beintehaa!

6 years ago Beintehaa's awesome! Love u BI! No matter what e'll be ever lasting and eternal! Love Pree and Harsh!

+ 4
6 years ago Love the bonding of the Beintehaa cast and crew.

6 years ago Harshad Arora you and preetika rock in Beintehaa

6 years ago Harshad and Preetika rocks ~~souls of Beintehaa !

6 years ago simply fab show Beintehaa i love them all!!

u guys are fabouls.
Kamya is doing a great job as zarina.