Here she talks about her journey and Akshay Kumar. 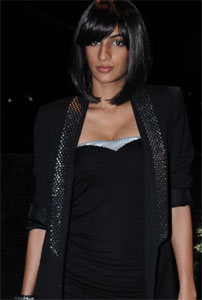 How is the experience of winning Fear Factor Level 2?
I am on cloud 9. Whenever I have kids I will tell them not to mess with mom for she had won Fear Factor 2. Jokes apart, the wait was long and we all three finalists were really stressed out as obviously everybody wants to win.

Akshay gave you a ring on the last day?
I was so happy that I told him why you don't make me wear it. He laughingly said, no my wife will kill me. By now everybody knows that I just love Akshay, his mischievous smile makes my heart skip a beat. He would really pull my leg as I would go on blabbering and doing weird stuff.

It is said that you were quite superstitious?
Many people including our famed cricketers too are superstitious. My uncle told me to wear a kala dhaga on my hand. When I asked him where would I get one,  he quipped beg, borrow or steal. I finally had to pull a string from my track pants. It did no end here, I even wore the same
color clothes throughout. I had to keep washing and using them.

Do you believe in luck?
I believe that besides hard work, luck also plays an important role. It decides whether you jump into a stunt first or get a chance to see how other's fare before you, and pick up pointers. Fate might even have a say in which stunt will you have to do when you face elimination.

Among all the stunts you did, which were your best and which was the one you hated?
I loved the chopper stunts. I would do them again if given a chance. As for the worst, it would have to be the cockroaches, it was terrible. After the stunt I did not notice and one roach remained in my hair for about half an hour. And how I can forget the drowning incident, the
whole country saw that terrible moment.

Were you afraid?
I am sure all the girls must have got scared seeing the stunts, but what gave us confidence were the safety arrangements.They were top class. I am sure that there is a greater risk of us getting involved in an accident on the streets of Mumbai, than on the sets of Fear Factor.

Your equation with partner Gurmeet?
We worked as a team. When you perform such stunts, it is essential that both the partners are in sync. I will be honest, when we started we did not think that we will win, but gradually our confidence and trust in each other grew. The fact that both of us were Punjabi, made
our job that much easier. Akshay got along with Gurmeet also quite well and he would tell the other girls that he is lucky and you should hug him before doing your stunts.

Any song of yours which you sang the most?
There was one which really suited the occasion Tu Sale Kaam Se Gaya.

Any more reality shows?
After two, I think I have had my fill(she had previously won Coke [V] Popstars )

What next?
This show had caused upheaval in my life. Now having won it, I will concentrate fully on my play back career, which is slowly taking off. I have sang songs in most of the new and upcoming releases, Alladin, Kites, Pyaar Impossible etc.