Chhavi Mittal who debuted in Tumhari Disha and has done variety of shows like Twinkle Beauty Parlour, Virasaat, Grihasthi, Nagin and Bandani is currently seen in "Ek Chutki Aasman" has come a long way career wise.

So here's she speaking her heart out about her upcoming show and other aspects of professional life…. 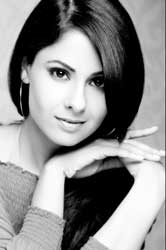 Tell us something about your character in the serial "Ek Chutki Aasman"?
I enact the role of a single mother, who takes her own decision, and she is timid yet strong. She stands by her decisions, is ready to do anything for her daughter and is ready to face problems.

Why did you choose to play a non glamorous role in "Ek Chutki Aasman"?
For me creative satisfaction is of prime importance so I don't consider any other criteria while choosing a role. Then if I find the role challenging I take it up.

How is it working with the production house Sphere Origin?
I have worked with them in Grihasthi so I know this team very well and it has always been a pleasure working with them; they all are friendly and positive. This atmosphere helps actors to concentrate on their work instead of other things.

Do you think that the concept of your show is somewhat similar to Uttaran?
No it is a different story, it is strictly about mother daughter
relation, they get separated during a course of time and focus of the story will remain on their journey. It would be incomplete if either mother or daughter will not be there in it.

What kept you away from TV for so long?
As I said earlier for me creative satisfaction is more important, and I was getting offers but those roles weren't challenging and I did not wish to do those run of the mill. I wanted to do good shows which give a scope to an actor to showcase his or her talent.

Did you have any apprehensions about playing a mother on-screen?
I did not even think about this, I am a protagonist of the show .I found it interesting because I thought since I am not a mother in real life it would be like testing me on screen.

Many of your contemporaries are sitting jobless, you constantly get good work. What's your take on the same?
Industry is going through tough time. But I think I am blessed, I have been getting good work constantly. I have been doing cameos and now also getting lots of offers as I am not fussy about it .People rejects show due to various reasons like location, time, and money and so on. I am only concern about role.

Do you think it is a risky to do a show on less popular channel?
No, acting is my profession and passion so; these things do not matter to me. Even If I do a show for number one show or not, I am sure that I will get similar satisfaction.

Which was your most memorable character?
It was a character which I played in telefilm. I will always remember that role, it was for the first time that I faced camera .I played a main lead, it was very simple character of college going girl.

You are a trained singer, so do you plan to do something in music?
Of course why not, if someone will give me such opportunity then I will surely jump on it. I feel that I should do everything in which am good at. I do not wish to leave any stone unturned.

You played cameo role of Ronit Roy's wife's in Bandini. The leap is happening. If you are called back will you go?
I do not mind doing a role once again. I played pivotal double role, so it was good. I had seven scenes in every episode so you can imagine how this role was .If they offer me something I will do it.

What's your take on shows going for leaps?
It is channel's decision and they have their own talented creative teams, so if they think that it is in favor of the channel then it is fine. Lots of money is involved in shows so they know what is better for their shows

What are your future plans?
I do not plan my future at all, I do not even think about what is going to happen tomorrow. Therefore there is no question that I will think oh what I will do after a year.
5 Likes

Shaz_x 10 years ago She's a really nice girl and a wonderful actress :)

Salman Khan's Official Statement about his Connection with ...
3 minutes ago

Naagin 5: Veer to return to destroy Bani and Jay?
43 minutes ago