View Profile
Another glamorous model Vivana is all set to enter Bollywood with her upcoming film Jimmy. Vivana feels lucky to have legend Mithun Chakrobarty's son, Mimoh as her co-star.

Q. What is Jimmy all about?
A. It's a thriller film with lots of action, drama, songs and romance. So it's a typical hindi masala film.

Q. Your character in the film…
A. It's a very bubbly character with a little bit of ego problem, but the moment she falls in love, everything gets changed and she becomes normal.

Q. How was it working with Mimoh?
A. It was nice working with him as he has no ego problem and he never showed that he is the son of such a big star. He is very down to earth. He is very supportive and as he has lots of ideas regarding films, he helped m 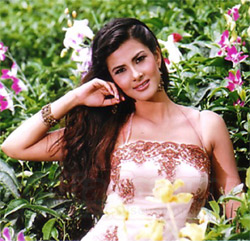 Featured Video
e with the camera angle and other things.

Q. Did you undertake any professional training?
A. I went to Anupam Kher's acting school in 2005, for three and a half months. Three months is not enough but a lot of things get clear.

Q. Did Mithun da visit the sets?
A. Yes, he visited, but he never interfered with anything. He was very normal.

Q. Did he give you any tips?
A. Yes, he did and not only in acting, but also regarding make-up. I was surprised that in spite of being a man, he knows so many things about make-up.

Q. Are you nervous with the release date coming near?
A. Do I look nervous? (Laughs), I am not nervous, but I am very much excited because whatever happens is for the best. I wish the audience likes the film, as we all have really worked hard for it and as every newcomer, we too dream of success with this film. People will come to see Mimoh and being the lead actress with him, I too will get noticed and hope that the audience likes the film and our effort.

Q. We have heard that you have also done ramp shows…
A. I have done a few ramp shows, but I am not comfortable with that.

Q. Differentiate between Mithun da and Mimoh…
A. Mithun da is tall, dark and handsome while Mimoh is very Hollywood kind of a guy. He is fair, huge and has got a nice flow of his hair. He is very international and Mithun da is still a legend.

Q. Any interesting incident that you remember happening on the sets of Jimmy?
A. One day when I did not have my shoot scheduled, Daddu da called me on the set. When I reached there I saw Usman bhai the fight master who was acting like a drunkard. I did not know him so I went to Yogita aunty and sat with her and then Usman started to puke water. I told Mimoh about that and asked why Daddu sir is not doing anything. He asked me to forget it. Then suddenly he came up with a stick and started behaving like a mad person and no one was moving. I was shocked to see these kind of people in Mumbai. I got terrified and ran to Daddu Sir and told him that I am going back. This is when I came to know that I was being made a bakra. Everyone started laughing as Daddu sir disclosed who Usman bhai was, thinking I would start crying any moment.

Q. Any other projects you are working on…
A. Not at the moment. Talks are going on with couple of producers but it's still too early to disclose anything about those projects.