Arhaan Behll plays the very unpredictable Krishna in Spellbound Productions and Star Plus Mann Ki Awaaz… Pratigya. This is his debut as an actor and he is pleasantly surprised with all the love and adoration that's being showered on Krishna.

Here, he talks about how he trained for the role, his theory on why people like Krishna despite the grey shades and how he can never fess up to a girl about his liking for her. 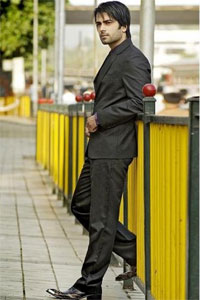 How did Pratigya happen?
I just went for the auditions- my first audition for a TV show- and I got selected.

Have you always been inclined towards acting?
Yes, right from school days I was into plays and drama. But I hadn't worked professionally after that. So Pratigya is my first step towards professionally pursuing my acting interests.

Tells us a little bit about your character.
Krishna, is not a bad guy, he is not a goon even though the way he treats other people is not very nice. But it's because of his family, the way he has been brought up that he behaves aggressively. From inside, he is very good.
Also, he carries a gun around because of which no one questions him. So he feels like a King. He has this bit of attitude (laughs).

With so much of negative shades in the character, didn't you feel apprehensive of taking it up?
Actually, no. I loved Krishna the moment he was narrated to me. He was so different from me that I found him challenging. The contradictions in his character made him more interesting.

How did you groom yourself for this character?
(Laughs) Actually, I watched a lot of films like Haasil and Omkara. Got to know many things from them. I also had a seven day workshop with my writer. So I got to learn a lot about language and where I need to stress etc. Later, we were in Allahabad on a ten day shooting schedule. That gave me a chance to observe the native people in their own surroundings…which was like the best lesson.

Do you relate to your character?
Arhaan and Krishna are totally different. Arhaan speaks Hindi, Punjabi and English whereas Krishna speaks in a typical UP dialect. And Arhaan is really shy. But I guess there a few similarities.  Arhaan and Krishna both are fearless and totally loyal. Also, Arhaan is a bit stubborn but not as much as Krishna (smiles).

What do you have to say for the way Krishna pursues Pratigya?
Umm…what can I say? It's the demand of the show…

What according to you is the ideal way to approach a girl one likes?
Well, see when it comes to me, I can never go up to a girl and say that I like her. But that is the best way according to me, to pursue your darling girl. Just go up and say that you like her and leave the decision to that person.

Tell us a little about your real-life experience in wooing a girl, romance, puppy-love…
I've had so many crushes I don't remember a particular one right now (laughs).

You have a huge fan following despite the fact that your character is not all that lovable. What do you think is the reason?
Krishna is loyal and has a clean heart, despite all the shortcomings. The intensity, with which he loves, is craved by most of the girls. I think this could be reason…I don't have any other theories.

How has the fame and recognition affected your personal life?
It hasn't affected me as a person or my close ones in their feelings towards me. But it has affected my daily life. In the sense whenever I go out people recognize me and come up to talk to me. They discuss Krishna's character; ask for autographs or pictures…at times phone numbers (laughs).

What kind of feedback have you received on Krishna's character?
I got to know from them that they hate his shoes. Many people have told me the same thing- 'Please change the shoes that you wear onscreen' (laughs). So I've asked my creative to see if something can be done about it.
And they loved when Krishna said – I lub you (laughs). When I performed for the shot, I wasn't sure about it. I was like it doesn't matter how rural a place is…everyone knows how to say I love you. But turns out…that particular scene has become a favorite!

Tell us about your off-screen relationship with Pooja Gor.
We are good friends. We always keep fighting over silly small things. But it's all in good spirits. In fact the entire cast and crew is very nice. I have a good bond with all of them.

krishna24 10 years ago arhaan means ruler and u rule the whole world.

maheen62 10 years ago ur name is so nise like u....u r to handsom...main aaap ko krishna bhayya he kehti huun..bekoz i like ur character in show..

ArtiMayur.Meeno 10 years ago Iiiii Lub u
keep rocking and smiling=)

bwoodlover01 10 years ago so many postings, all in one day! he's become sooo popular overnight! I had never thought that people would love him so much, i thought it was only me. i was soo wrong, lol:)
"lub ju"
xoxo

rumshawarsi 10 years ago i love ur accent seriously out of the world.. entire family is cute .. blessings :)

SANARHAAN 10 years ago I lub u Arhaan! u act really naturally! keep up the good work and see u'll soon touch the skies! My best wishes are always wid u! no actor can compete u! u r the best =D

sanaya38 10 years ago hi i m ur very big fan i like krishna style .u have a magical eyes and ya i want to say that now pratigya and krishna fighting should b end and they should b start there love