View Profile
After coming into limelight with recently released film Sivaji, Shriya Saran has now become a hot property in Bollywood now. Almost every producer in this tinsel town is running behind the actress to sign her for their films. But the gorgeous babe believes in doing one film at a time giving hard time to the desired producers. Let’s see what this lady has to say about her upcoming release Mission Istanbul in which she is playing Zayed’s wife who is a professional news reporter.

Q. In which genre of films does Mission Istanbul fall in?
A. The film is full of action. It’s typical Appu’s (Apoora Lakhia) film which has been beautifully picturized. The story of the film revolves around the serious issue dealing with terrorism. The issues related to terrorism have been beautifully portrayed through this film.

Q. How much scope do you see for yourself in this 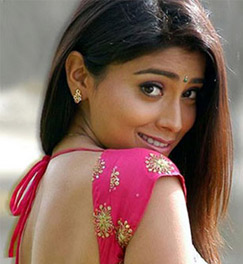 Featured Video
action packed flick?
A. I don’t disagree that the film has many stars and is full of action, but every character in the film is playing an important role. Every character has been beautifully scripted. The story-telling of the film is like reading a novel, which, you can’t put down even if you want. When I got the script of this film, I read it at one stretch and instantly decided to be a part of the film. For me, more than the length of my character, it’s the maturity in it which matters.

Q. How did you bag this role?
A. Apoorva had seen my previous films Sivaji and Awarapan so it wasn’t hard for him to find me. Frankly, I, too, was dying to work with Apoorva (laughs). I am happy that I didn’t have to give any audition or look test for this character.

Q. Tell us something about your character…
A. I am playing the role of a television journalist who is very successful in her field. She is very honest with her work.

Q. Did you have any particular news reporter in your mind while preparing for your character?
A. Yes, I always had Barkha Dutt in my mind as she is been termed the first reporter who went across the border to report during the war scenario. I saw a lot of her shows. Apart from her, I also viewed a lot of international news channels. While playing the character of a reporter I realized that it’s not only difficult to reply to answers but even throwing questions is a very difficult part.

Q. How did you feel working with Apoorva?
A. He is very intelligent director. When I met him for the first time he gave a bound script in my hand. Apart from the script, it had the information regarding the shooting locations and schedules of our film. I was very impressed with that. And frankly, like every actor I expected a lot and was meaningful regarding my part in the film, but here comes the capability if Appu, who convinced me into playing this role. Apoorva has the talent to convince any actor.

Q. In Apoorva’s previous film Shootout At Lokhandwala, Diya Mirza played the character of a reporter and many of her scenes were been edited. How would you react if the same thing happens to you?
A. See, some films are story oriented while some are based on a particular character. This one is a story oriented film and I have always believed in working for the film rather than showing myself.

Q. That means you prefer story oriented movies rather than character based ones?
A. It’s not like that. For example, though Sivaji was a story oriented film but I, too, had a very strong character to play in it. Many a times they both gel together nicely.

Q. Both Vivek and Zayed are tagged as very good pranksters. Did you face any of their pranks?
A. No. Neither did I try playing any pranks on them nor they did. The fact is when I am on the sets my whole concentration is on my character. Seeing my seriousness towards work, Vivek and Zayed got so afraid that they didn’t have the guts to play any prank on me. Yeah, we surely had had good times together. But we never made a laugh or played prank on anyone.

Q. In present times, many South based actresses like Asin, Sada and yourself are entering Bollywood. What do you have to say about it?
A. Frankly speaking, the entire bunch is of talented actresses. I love to compete with them as I have always believed in healthy competition.

Q. Post Sivaji, Shankar is planning to make Robot and it has been heard that he faced a lot of trouble in finding the right cast. Did he ever approach you for this film?
A. Not at all. In fact I don’t even know what he is doing these days or whether he had problems regarding casting. Yeah, but I have heard that my favourite actress Aishwarya is doing that film, so I am very happy about it.

Q. Tell us about your future projects…
A. I am doing a film called Ek – The Power of One. Then Ashok Amritraj’s English film Other End of the Line, Deepa Mehta’s What’s Cooking and South flick Kandhaswami. I have also signed another south film where I am playing the role of an eighteen-year-old girl.

Q. We have heard that you have signed a big deal for three south films?
A. No, I never believe in a deal neither do I believe in signing 3-4 films at one time. I love to do one film at a time.