Ronit Roy, the very popular actor adored and appreciated by one and all for playing the phenomenal characters of Mr. Bajaj, Mihir Virani and Aparajit Deb talks to our reporter Melanie about his fans in India-Forums, his experience in Jalwa and his progress as an actor... 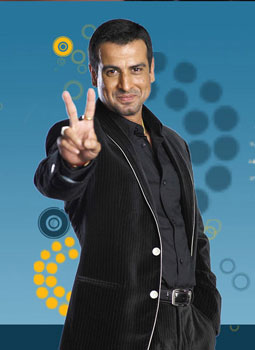 Featured Video
You made it to the finale in Vodafone Yeh Hai Jalwa. Did you expect to reach this far in the competition? How does it feel coming this far?
Firstly, I’d like to thank all my fans across the globe. This show has no judges and the audience is our judge. The reason we have reached to this level is all thanks to you. About my expectations, all I can say is that my team and I took it one-step at a time. When the show started, I was very categorical about my performances and I do not have the intelligence to think thirteen weeks down the line. It is a tough task trying to match the physicality of different dancers and to bring them together to make them a team. Now, it’s dawning upon me that I am in the finals, and I am quite happy for myself and my team. It is a great feeling.

You have performed consistently in Yeh Hai Jalwa. All the other participants and team members adore you. Yet in the VT telecasted in the show, you saw their antipathy towards you. Do you think it was a case of sour grapes, to say?
Normally I would not give it a second thought. I never knowingly under perform, if there is a lack in my performance that is plainly my fault. I am a human being and I do make my own mistakes. Sometimes I take too big a challenge, as they say I bite off more than I can chew; I get too ambitious when it comes to my challenges. However, the whole thing about life is that you have to keep pushing yourself. That’s how I have grown and managed to make a mark in the industry. As for the negative criticism, I respect the different points of view. Not everyone needs to like me. However, what irked me was the way it was put across. It was very degrading and said in a very teasing and cocky manner. It was a very childish attempt but then what can I say, I respect your views and God bless you all!

You are part of one of the longest running shows on television. Now Smriti Irani is back on the show, so how does it feel to have her back on the show?
When the shift happened, I did not comment and I do not really want to comment now. At that time, a simple statement made by me was misconstrued or there was probably too much profundity in what I said. What I meant back then was that, it does not matter to me who plays Tulsi because as Ronit Roy, I might have a preference but as Mihir Virani, I do not have a choice. Mihir has to love Tulsi, no matter who plays the role. However, both, Gautami and Smriti, have done a fantastic job playing the role of Tulsi.

You are associated with india-forums in a big way. What do you have to say about india-forums.com/tellybuzz as a television news site?
I think it’s one of the most popular television sites on the internet because in a lot of conversations its name keeps coming up very often. During my research on the net, I have found that it houses many people. Like I have my family, you guys have your family and it is a very, very, very large family and to keep such a large family together, you have to be one of the best.

Your message to all your fans.
Firstly, I’d like to thank all of you for all the love and support for the last 7-8 years from the bottom of my heart, for being like a family to me, for your comments, whether appreciation or criticism. What can I say, I am what I am today largely because of all of you. What I like the most about you is that, like me, all of you also want to keep raising the bar. So, let’s hope we can keep raising the bar together, attaining new heights and accepting new challenges and grow old together. All the best!!!

This was just a sneak peak of the Exclusive Video Interview that Ronit Roy gave to India-Forums Telly Buzz. To catch the whole video, please click on Part 1 and Part 2.

14 years ago Aww hes soo sweet!! i thnk hes one of the bst actrs!! hes a wckd dancer and actr 2gthr!! shame his brother wnt out though!!! he was really good aswell!!!

14 years ago Ronit u really rock u r one of the best actors we have on tv and in india...i luvd u in kasauti, kyunki and i only watched kasam se for that little while cuz u were gonna b in it i think that was one of the most interesting characters that i've ever seen of aparajit deb u carried it off amazingly...he really is the king of tellywood!

14 years ago Thanks guys for this rocking one on one or face to face interview with Ronit. He is simply the most down to earth actor ever. Love him always, and proud to be his fan. You r the best Ronit.

+ 5
14 years ago Ronit is so adorable! I just love Bajaj's character! Hes a great dancer too!

14 years ago Thanks . His team performed very well in YHJ