Nausheen Ali Sardar has carved the image of a hardworking middle class woman as Kkusum. After being off the limelight for nearly five years, the versatile actress is back on the small screen with Imagine TV's new launch Beendh Banunga Ghodi Chadhunga, produced by Fortune Productions and Endemol India.

She plays the character or a traditional daughter-in-law and mother who gets into a complex situation when her son falls in love with a girl who aspires to become a doctor.

In an exclusive chat with TellyBuzz, Nausheen discusses her journey in telly land and on her comeback vehicle.. 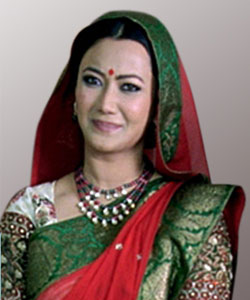 Your character in Beendh Banunga Ghodi Chadhunga?
The character name is Santosh, a house wife who believes in the traditional customs and rituals. Her family is her entirety and she is eldest daughter-in-law who holds the family together.

How can you relate yourself with the character?
As an actor it is my job to get into the role I get, and it is not necessary whether I can relate to the character I play or not. Here I play the daughter-in-law of a Marvaadi family, for which I had to do a study on the mannerisms and diction of a normal Marvaadi woman. They are more graceful.

KKusum was a huge hit where you played the lead role, were you apprehensive about the role that you got in the show?
Not really, because it is an important role that came to me and a pivotal one which I could not ignore. She is the mother of a boy who falls in love with a girl who wants to study further, which is not really allowed in a Marvaadi family. Hence the conflict arises, where the mother has to stake a stand.

How has it been working with Imagine TV?
It has been a lovely experience with Imagine till date, though it has been only a month. They explain the role very well and I am fortunate to get the role that they had briefed me. At times it happens that the explained role is not what you end up doing.

How is it working with Endemol and S. Farhan?
It is a dream that I am working with them. They take care of all the necessities and it is always actors first for them. We are given exclusive make up rooms and have a very clean atmosphere on the sets. They have done an extensive study on the characters and the family background, which helped us a lot.

What was the reason that you took up a show on Imagine?
It is a popular channel and most importantly, the show was appealing to me, and the biggest plus is that all the characters in the show are positive. The conflict arises because of the generation gap and the differences in the point of views of people.

There are several other casts in the show, how has the experience been working with them?
We are like a big family on the sets where we have Himani Shivpuri, Sahil and all the girls; we have a great time shooting. We all have worked a lot and the show was not made overnight.

How has your life changed after Kkusum?
Like how anyone's life would change after a popular show where people know you as the character, they still address me as KKussum.

How has the journey in the industry been so far?
The journey has been pleasant and satisfactory and I wish to do more shows in future.

You are back on television after a long time; how do you feel?
It is lovely to be back, but at the same time after living life on my terms like sleeping for eight hours, the schedule has become a little hectic traveling up and down. But that's a part of work and it is fine.

What are the changes that you see in the industry after the long break?
The scenario is a lot better than before. Where we had worked for eighteen to twenty hours a day earlier, we work for just twelve hours today. It is a relief that the industry care for the crew a lot. The work is more organized now.

How were you engaged during the break phase?
I was not really taking a break but was engaged in films and theatre where I did films and shows in Pakistan as well. Also I was spending quality time with my family.

Are you still in touch with Ekta Kapoor?
Yes I am, and we are on good terms.

What was the struggling phase of your life?
I am really grateful that I did not have to struggle that hard in the industry. But in 2008 I lost my dad and that was a tough period for me.

What are your opinions on the industry today?
There are a lot of young faces and they are doing a good job.

You have also tried in films as well which did not go very well as expected; will you try again in future?
It is not that I have given up on it, but I am enjoying what I am doing now.

Was it frustrating as an actor when you could not make a comeback?
Not really because if I had wanted, I could have made a comeback earlier.

What were your plans, what kind of role were you looking for?
I was offered many roles but we should know what is available and what works in the industry.

We have heard you were offered many roles, so does it mean you were choosy?
Yes I am very particular about the characters I play.

Are you satisfied with the character with which you are making a comeback?
Of course I am really very happy.

You have a great fan following in India-Forums and they are waiting for your comeback, what would you like to say to them?
I would like to tell them that do watch the show Beendh Banunga Ghodi Chadhunga, because it has a good concept and you guys will not be disappointed.

peehu.vg 9 years ago lots of things have changed ... you were the most beautiful face on indian tv once and than u got this face job dne dat has almost made u unrecognisable ... really sorry to see that .. but dnt underestimate urself .. i feel u have shortchanged urself and taken a mothers role in this show ... u cud have dne much better really .... but all da best

Gauahargeous_N 9 years ago im surprised she actually took up the moms role... the tv industry is a weird place!

second_chances 9 years ago she is amazing in whatever she takes up! all the best to her!

pyar-ishk 9 years ago OMG Nausheen I didn't know you were back on tv.

Gosh my first Ekta show herione Kkusum. I hope you make this character your own like you did with KKusum.

Faraan92 9 years ago Its really sad to see such good actors playing da role of a mother otherwise they cant come back in TV..:(:(
Pak tv industry is better according to dis scenerio.. atleast u dont hav to play da role of a mother dere nd again come in a serial as a lead actress..!!!
Well wish Nausheen all da best..!!!