It seems Kumkum has finally started to tire out Juhi Parmar. "How long can I go on playing the same character? The actor in me needs other avenues. Don’t get me wrong, I love my role in the popular Star Plus show but yes, the saturation point has also started to creep in", admits the gorgeous Juhi Parmar.. 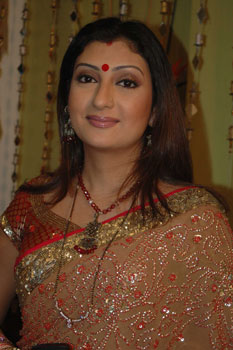 Featured Video
Juhi will be seen in a new avtar in NDTV Imagine's Say Shaava Shaava starting 21st January. Looking forward to this pleasant change, Juhi says, "I just hope that 2008 brings in variety of different roles. The start has been good with NDTV Imagine's Say Shaava Shaava". She adds on, "This 11 day non stop dance and song extravaganza will be different from other reality shows in the sense that you will not see unnecessary drama. We all 8 contestants are more interested in our own performance rather then bringing down the other. Infact, we egg them on".

Juhi says that the opportunity to learn something new encouraged her to join this reality show which will be judged by renowned names such as Karan Johar and Simi Garewal. "I have always loved Bollywood songs hence could easily pick out mistakes in Antakshri, without having to consult the research team", she remembers proudly.

Who do you think will win Say Shaava Shaava? "Sumeet Raghvan has a better chance as he has already finished runner up in Marathi Sa Re Ga Ma Pa . So unlike us, he will not not have mike fright, isn't it? Plus he is a great singer to boot as well", opines Juhi. Among the females, she felt "Narrayaanie Shashtri is the best bet".

In closing, we could not help but quiz this Rajasthani chic on her alleged encounter with her ex guy, Anuj Saxena at the airport. She quickly denied any rapprochement saying, "The airport is not my private property and I do bump into many people and that is exactly what happened with Anuj. You guys have a propensity to make mountain of mole holes", she grinned.

14 years ago Well all the best to Juhi, but just wondering why is Narayani Shashtri's name is spelt as Narrayaanie Shashtri ?? She changed her spelling due to astrological purpose ?

14 years ago so juhi used to date anuj saxsena???? he is the one who used to play Kkusum's love interest earlier in the show right????

+ 2
14 years ago Hope she never leaves KK coz if she's not there, the show's useless!!!wishing her all the luck in SSS & keeping fingers crossed she wins!

And Juhi we will always continue to love u even as Kumkum...

i wish juhi gets to play a variety of different roles in 2008. she plays kumkum perfectly but i agree playing the same character for so long can come tiring
wishing her all the best for shava shava and 2008 too