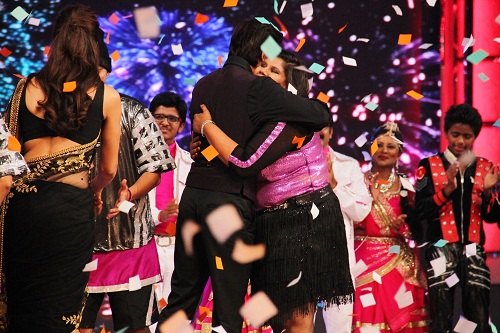 Zee TV's dance based reality show Dil Se Naachein Indiawaale which was applauded by the masses for its unique concept and laying a platform for the people to showcase their talent in front of the esteemed judges.

As the show saw its grand finale, the Mumbai team was announced as the winner of the show. The participants Priyanka Mydeo, Vipul  and Gaurav are highly ecstatic to win this show as it has given an exposure to their talent.

We speak to one of the winners Priyanka Mydeo to know more about her journey, winning moment and more...

How has your journey been in the show?

It was great and painful at the same time. We practiced so much, got tired and even injured ourselves. We almost reached at the finale round which made us emotional and we will cherish this amazing journey of the show throughout my life.

Tell us about your passion towards dancing...

I started dancing since I was 12 years old. I used to watch movies and match up the steps from the songs. My first song was from the film Rangeela, I used to play the song and match up the steps from the song when I was in standard 2nd. Looking at my interest in dancing, my mother  insisted me to join dance classes. Since I am born and brought up is from Pune so I started taking training from Shiamak Sir later after shifting to Mumbai I joined Terence lewis classes which was a three years course.

Talking about your group partners - Vipul and Gaurav, how was your bonding with them?

It was amazing, our friendship grew better and better with this show, we supported each other and helped whenever needed. We actually met in some other auditions and from then we became friends, we used to practice together and later when we heard about this show we planned to give an audition together.

How was your reaction to perform in front of the renowned judges?

It was an OMG moment for me to see seven celebrities together on this show. Initially I was scared but then I left my nervousness behind and started dancing with enthusiastically. Thankfully all the judges loved the performance and I was still nervous to get praises and comments from them but everything went well.

Your performance on the 'Lovely' from the film Happy New Year was loved by the judges, what do you have to say about it?

Deepika Padukone herself said to Farah Khan that she should have taken me for the song, which a cloud nine comment for me. Even after the finale Farah Ma'am complimented me and said that actors should learn from me how to dance and express through my performance, which is in itself a big thing to get from such great personality.

Lastly, what are your future plans after winning Dil Se Naachein Indiawale?

I am planning to start my dance class now and I really want to get into acting and will be waiting for good opportunity to come my way.