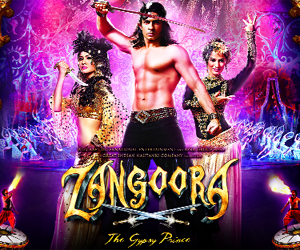 The handsome hunk Hussain who rose to fame on small screen with the show Kumkum - Ek Pyara Sa Bandhan has been very much appreciated for his excellent hosting in Indian Idol series. After his stint on the small screen he was seen on the silver screen. He was recently seen in the film Shree.

When asked Hussain about what is keeping him busy these days, he says, "I am busy with my Zangoora show which is a weekend show. It's the first live musical show, with 4D effects and you can watch it at Kingdom of Dreams, Gurgaon. It's also the first-ever Bollywood musical and it's called Zangoora: The Gypsy Prince."

Hussain was not seen on screen from quite some time now. So when we quizzed him whether will he come back to TV or will continue with films, he says," It's nothing as such. I am open for television and film both. I am just waiting for the right project. Zangoora takes my entire weekend time and it's good to take a break sometimes." (Laughs)

We wish all the very best for his future endeavors and hope to see him soon on screen.

Wishing you and Tina... a Very Happy 8th Wedding Anniversary today!!! Love you both!! &lt;3

+ 3
7 years ago Zangoora without gather khan.. She is also part of Zangoora?

7 years ago all d best hussain.. missing u on TV.. nw dnt want 2 c u as an anchor.. plz do sumthng similar 2 ur early shws .. specially KRISHNA ARJUN.. loved u nd shraddha nigam as detectives.. hope 2 gt a sequel

Abigia 10 years ago Our Badshah Shahrukh look at 100%. As always. Excellent brother. Well done. Everything has its time, and there is a time for every matter under heaven:

10 years ago Shilpa and sister deserved a 5 over the pediatrician's scrubs Kangana was trying to pull...god where did he inspiration come form...didn't want to be anactress or somebody forgot to donate her the pants...maybe the legs earned a 5!

10 years ago Kangana did not deserve a 5. Agreed with tulipbaby53-- her dress did look like a nurse's scrub.. anyways.. no comments for the bday boy... SRK and Arjun looked great and so did Deepika, loved her sari

+ 2
10 years ago kangaga looks like she was trying to make a nurse's scrubs into a dress! not at all deserving of a five.

kunal kapoor looks dashing, but yeah, he is overdressed!

SRK looks good and perfect for the occasion!

hrithik did not dress to the occasion at all! i would think that it was not his birthday by looking at him

+ 5
10 years ago rofl sum of them are hilarious like seriously and specially Bday boy shud go for half a star thats hirt didnt even look like a shirt more like a vest rofl! SRK looked gr8 and kunal kapoor overdressed but he looked gud!

+ 2
10 years ago kangana's dress was yuckk,
i dont know how she got the 5 but her shoes were definately cute

i think deeps and srk looked the besst (Y)