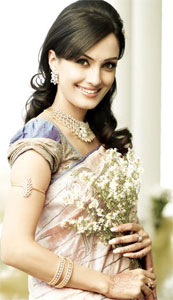 Whats the weirdest rumor that you've heard about you: That I'm married to Karan and this was even before we started dating.

A proverbial saying close to your heart: "If you love something, set it free, if it comes back, it is yours. If it doesn't, it never was."

One brand that you would love to endorse: Guess

A reality show that seems most real to you: Bigg Boss. Because you just can't keep wearing a mask for as long as a month that too within a confined place that you are forced to share with strangers. I think in such a situation the true colors eventually come out.

The one invention you'll remain forever thankful for: Phones!

Do you believe in fairy tales: Yes, I'm absolutely a fairytale person. I always live in my own fantasy world. My favorite tale is that of Goldilocks and the three bears. And because I make my love for them so public, people have gifted me loads of teddies over the years and I've ended up collecting them all!

The remake of any Hollywood film that you'd love to work in:  Monster-In-Law

A game that you're fond of: Pictionary

Your hobbies are: Swimming, reading and playing with my dogs.

One yester years' Bollywood actress that you can relate to: I can't relate to anyone because to relate to someone you need to know the person personally. But I definitely look up to one evergreen actress…Madhubala.

The foundation of a healthy relationship lies in:  Trust

Which newcomer in the television industry has made the maximum impact: Umm…Karan Mehra …(laughs)…please don't think it's because I love him. Even if he were a stranger I would've told his name.

Where do see yourself 5 years down the line: Definitely exploring the world of acting further deeply.

dr.della06 12 years ago i liked u ever since i saw u on a music video about 5 yrs back,,just cant remember who's song it was,ma b lucky ali..u've got a gorgeous smile

+ 2
12 years ago She is sweet!!!!She should do positive roles instead of the negative role she has done!!!!

12 years ago Love u Nisha. U really are very sweet.

But IF, you should have some more questions about Karan.

imran.khanrocks 13 years ago i love GENELIA''s hairstyle.....can anybody tell me how to get that hairstyle???plz!!!
i hate katrina with curls....

14 years ago actually, i thought katrina looked better with her namastey london curly hairstyle..that was adorable..