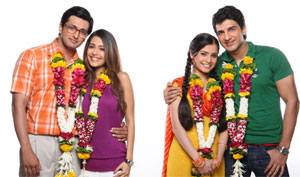 Star One and Playtime Creations' Hum Dono Hain Alag Alag is scheduled to go off air.

Tellybuzz had already reported that Star One is gearing up for a major revamp. As the first step, they have decided to chuck Playtime Creations' Hum Dono Hain Alag Alag.

According to our source, "The deal is done to phase-out Hum Dono Hain Alag Alag. The shooting will go on till 1st week of December and the last date of the show to be on air is December 11th."

An official from Playtime Creations confirmed this news saying, "Yes, it's true that December 11th is the last date for HDHAA."

Actress Dimple Jhangiani who plays the role of Avantika says, "Yes, we had already known that the show will go off air. But it's only an hour back that I came to know the last date of the show to be December 11th."

Producer Hemal Thakkar confirmed the news that the show is going off air on 11th December..

13 years ago loved remix. starone needs a really good show that we can all enjoy. i hope a new show starts soon.

+ 3
13 years ago Good!
But they have lots of time slots vacant..they can put their so called "family" dramas there!

jayati145 13 years ago This is a great show with a lot of comic touch and emotions and shouldn't go off air.