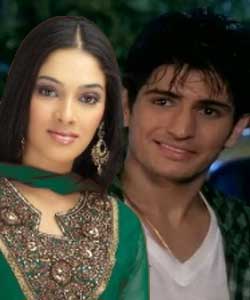 Hritu Dhudani who was earlier part of Balaji Telefilms' Bandini is back to the production house with their Star Plus show, Tere Liye.. She has now been roped in to play the character of Jonaki, sister of Mauli (Neha Saxena).

Our source states, "Robindo (Rajat Tokas) who has developed a hatred towards Taani (Anupriya Kapoor) will be even more livid when he sees Mauli and Tapush (Shaktii Arora) getting accepted by the family. Mauli and Tapush are going thro' their grihapravesh ceremony when Robindo creates a ruckus and chides Mauli for moving on in her life. At the same time, he declares that he too is in love with a girl and he is going to marry her soon".

This comes as a major shock to all, and there will be an intrigue created as to who the mystery girl is.

"Later, Robindo will bring the girl before one and all, and it will be none other than Jonaki who is actually the main reason for Mauli and Robindo's love story becoming a failure", adds our source.

The creative team has decided to replace Jonaki. Hritu Dhudani who was playing the title role in Sahara One's Bitto will essay the role of Jonaki from now.

When contacted, Hritu told us, "I really do not know anything. Nothing is finalized, and I am still in talks with Balaji for the role".

Let's now see how Robindo and Jonaki's roles will shape up..

fabihaharshiya 9 years ago Anupriya come back soon. Missin the hot and sizzling chemistry between you and harshad.
Desperately waiting for taanu and tere liye.

Angelanupriya 9 years ago really missing harshiya n tere liye..hope to see you guys come back on screen asap..till then have a chilling time...

Angelanupriya 9 years ago Anupriya you are the best. You are the only actress who gained all over fan following in short span of time.
In which ever serial you will go it will be a big hit. The most prettiest, the most stunning, is only and only our Anupriya our angel.

Kangana Ranaut tried to mock Deepika, Sara and Shraddha for ...
29 minutes ago