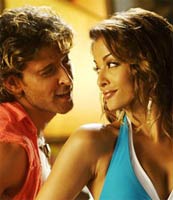 Hrithik Roshan and Aishwariya Rai Bachchan are set to make a comeback to the silver screen with their hattrick starer. After 'Dhoom 2' and 'Jodha Akbar', Aish and Hrithik will be seen together for the third time in Sanjay Leela Bhansali's untitled film. This will not only be Aishwariya's third venture with Hrithik but also her third project with Bhansali following 'Hum Dil De Chuke Sanam' and 'Devdas.' Both of these films have not only developed Aishwariya as an actress in multiple ways but these films have also proved to be huge blockbusters hits.

The project was expected to start earlier but Hrithik wanted to finish his home production 'Kites' before starting another project. Sources say that while Hrithik is working on his home production, Bhansali has started filming the scenes that do not require Hrithik for his untitled venture.

Will Hrithik and Aish be able to re-create the magic for Bhansali's flim? The venture is set to hit the theatres around April and May.
Featured Video