According to highly placed sources, Sambhavna Seth is not very happy at the fact that Monica Bedi has been sent as Wild card in Bigg Boss. She says, “How can Monica go when I got more votes??”. She has further raised questions on the entire nomination and elimination procedure of this Colors reality show as well. “My suspicions were raised when Rahul Mahajan asked me how many weeks I would want to stay”, says she. However the source adds that she does not feel that the behavior of participants inside was scripted. 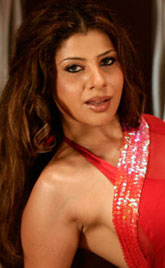 Featured Video
She has no qualms about playing games. “Had I not played games, I would not have survived even the initial two weeks. It was really tough to face all that I did from many people there”, quips Sambhavna.

In no mood to spare Payal Rohatgi, Sambhavna says, “I would not mind doing a film with her if I get a role to beat her up”. Things were not well between the two item girls even when they had both worked together in ‘36 China Town’.  Payal supposedly started the fresh tiff when she called Sambhavna cheap, to which the latter retorted, “Look who is calling me names, somebody who wears two pieces and gets massages??”. She is said to have confirmed that Payal and Rahul had played some "game" in the toilet.  She also laughed at the fact that Payal would steal ciggies. Sambhavna even quoted, "Payal and Rahul had a fling even before they entered Bigg Boss house".

On Casanova Rahul, she says luckily he did not hit on her. “Rather he called me his sister”, says the girl. However, Sambhavna confesses that she seemed wary of Zulfi. “He always played some kind of black magic; hence whatever he would say would come true”.

Sambhavna who went into Bigg Boss to please her father does not feel that she humiliated him by the supposed ‘kissing’ with Raja. “We were playing this game to make Payal feel jealous. If you watch carefully, I had covered Raja's face with hair and we both were laughing. Whatever came up on the screen was all the camera work!”, states she.

In spite of the bad memories inside the house, Sambhavna is glad to have got the love of all. “It was so nice to see women coming up and saying that I was so sweet in the games I played”, avers the girl. She was also touched by the enquiries regarding her brother and nephew.

Still clueless about her future plans, Sambhavna states, “I have a large number of TV and film offers pouring in, but have not decided on anything as of now”. However, our source says that she might be a judge on an upcoming reality show as well.

nidhika 14 years ago what ever said n done i really wanted to see the real physical fight between sambhi n payal.....

+ 4
14 years ago OMG ..how can she said that..who liked her...we wanted to be through out her
i voted against her

14 years ago Sambhavna should have been in! Who wants to see Monica who is sooo boring. Sambhavna would have spiced things up.

+ 2
14 years ago m very coz Monica Bedi is back n plz sambhavna ji jhoot bolna bandh karo u got more votes than Monica?huh impossible,anywaz Monica rocks thank GOD she is back.