The makers of horror movie '13B' can't stop smiling these days as their work seems to be heading to Hollywood. A film studio in the US has shown interest in acquiring the rights to remake it as an English film.

Hollywood studio Weinstein Company was quite impressed after going through the synopsis of '13B', which stars R. Madhavan and Neetu Chandra, and now wants to know more about the film before getting the rights.

'Yes, Weinstein Company has indeed shown a keen interest in the film. They have asked us to send them over the entire script of the film. Though they are seeing the film as well, they want to go through the script in detail to consider its adaptation as per western sensibilities,' said a spokesperson of Reliance BIG Pictures that produced '13B'. 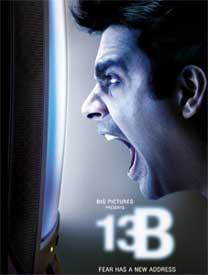 Featured Video
Writer-director Vikram K. Kumar is happy that his film is finding a following outside India as well.

'I'm extremely happy, ecstatic and honoured about the Weinstein Company considering the '13B' script for the remake rights. I would have never imagined that this may happen,' Kumar told IANS.

'13B' revolves around a television set that creates havoc in the life of Madhavan by showing on screen real events that are going to happen to his family.

Horror flicks coming out of the Indian film industry are often accused of following a set pattern. But the trend has started changing for the better in the recent past, thanks to successes like 'Raaz - The Mystery Continues', 'Phoonk' and now '13B'.

So '13B' being considered for a remake is big news for Bollywood since the Weinstein Company, an independent American film studio founded by Harvey and Bob Weinstein, has quite a reputation. In the past, it has released films like Pierce Brosnan's 'The Matador', Jennifer Aniston's 'Derailed' and Felicity Huffman's 'Transamerica' amongst many others.

Considering the fact that Bollywood has time and again looked at the west for inspiration, isn't it flattering to see a Bollywood film crossing the shores?

'Of course yes. It's one of the few times that an Indian script is being considered by the western market; otherwise it's always been the other way round. This turnaround could also be attributed to the 'Slumdog Millionaire' effect which has suddenly made Indian content a top consideration,' said Kumar.

While the producers have started making arrangements for serious talks to begin around the remake rights with the Weinstein Company, lead actor Madhavan is more than happy with just the response it is getting in India.

'In Mumbai, the second weekend has been better than the first. That itself is an achievement since '13B' has been doing very well through positive word of mouth. In its Tamil version, the film is already a big hit down south,' Madhavan said.