It's been over a fortnight since Season 2 of Bigg Boss began on COLORS. And we decided to put it through the scanner thoroughly before the review. Here's what we felt. 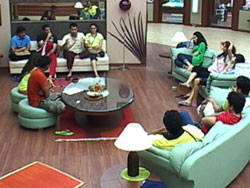 Featured Video
The line up: At first glance they all seemed like a bunch of "double losers" as a friend put it. But as days went by, Rahul Mahajan clearly proved to be a viewers’ delight, as he wooed the girls (read Payal Rohatgi and Monica Bedi), made sisters (Rakhi Vijan and Sambhavna Seth), cleaned toilets, gossiped non-stop, broke rules and showed that if you took away his famous second name away, he is your regular guy (but who manicures his fingers, doesn't think twice before putting kohl in his eyes to play 'Krishna' and gamely lets himself to be a butt of all jokes of his fellow contestants) in the house. 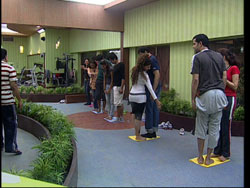 While Sanjay Nirupam promised a lot of drama (and he did manage to create some with his unpalatable remarks about Sambhavna's 'item girl' status during his one-week stay), Rakhi Vijan spelt 'hysterics' (unfortunately her bindaas attitude boomeranged as she was shown the door in the second week). Seth filled in for last season's Rakhi Sawant, cry-baby Payal for Rupali Ganguly, Ahsaan Quereshi with his sing-song style, who one of the contestants has described as the 'sly' one who makes chauvinistic remarks in the guise of his jokes, Ketaki Dave, the mother hen who doled great advice and preferred to keep to herself and her adrakwali chai, small townie Ashutosh the wicked one, Debojit Saha (a personal favorite) who would rather be doing riyaaz than get caught up in girlie gossip and male politics, Zulfikar Sayed who too in his broken Hindi upped the wicked quotient and Raja Chaudhury who seems to have weak moments on seeing his ex-wife Shweta Tiwari and his daughter’s pictures are all slowly learning the tricks of the game. 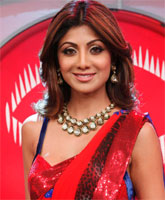 The Entertainment Quotient: The most saddening part was the premature exit of Jade Goody whose very presence in the house could have given the viewers some captivating moments. The first few days were definitely boring as viewers waited with bated breath for Monica to spill the beans about her underworld connections and Rahul to talk about his family woes but both of them, especially Monica, preferred to just cry and make sympathy-evoking statements instead of giving away any solid dope. Fortunately, with Rahul still in the house, the show guarantees drama in the days to come, as he ping-pongs between Abu Salem's moll and B-grade Payal.

The tasks given by Bigg Boss too have been mildly interesting except the celebration of Janmashthami which they did with great gusto. Shilpa Shetty in her luscious host avatar is total paisa vasool. Pooja Bedi though goes OTT as she grills the evictees. Needs to go easy on her animated movements, roll her eyes less and control her urge to speak more than the contestants.

TRP moments: Rakhi's breakdown and her tender moments with Rahul and Monica. Her heartfelt apology to Rahul when they were both nominated last week for eviction.

Hit ya miss: Should be a hit as long as Monica and Rahul are inside…Also Sambhavna, Ashutosh, Raja Chowdhury and Zulfi in supporting parts are expected to provide some prime time ammo.

+ 5
14 years ago great I hope he gets better role this time. good luck to him. I saw him dancing in awards and he looked and danced so well.

14 years ago Lol..This is really cool...but first season was rocking compare to season 2

+ 3
14 years ago ashu n sambhavna will definitely create alot of havoc in the house..
i luv the show for thm

+ 3
14 years ago I have to say that I liked the first season better..it was a bit moer appealing..
haha, Payal the Rupali of BB2..I think Monica is instead of Payal though!..Debo's the Baba Sehgal, Sam is the Rakhi, Payal's the Anupama, Rahul the Aryan, Ashu the Rahul and Alina the Ragini..

14 years ago compared to the first season , 2nd season is not so interesting..even the tasks given are too lame..i hope it gets better soon.

14 years ago I love this show! Its absolutely hilarious! Rahul is toh fully entertaining...and so is this so called triangle between him, Payal and Monica. Ashutosh's dance! Damn that was jokes...It makes me wish I had seen Roadies 5.0 looool