The leap on Zee's Saat Phere has already taken place with some new and fresh little wonders entering the show. Nida and Ulka Gupta are the latest two to join the bandwagon on Indian television. 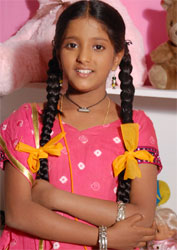 Talking about both characters Deep, the Creative Head of the show states, "We are showing both children of eleven years old. One is dark and ordinary looking, while the other is fair and beautiful".

Elaborating on their roles he quips, "Savri is essayed by Ulka and is the maid's daughter, while Shweta (Nida) is daughter of Saloni. The two are very contrast in nature. One is simple and the other has lots of attitude".

"Shweta has attitude because she is fair and is the ladli of everyone in the house. We cannot term her as a spoilt brat though", he adds further.

Well, so this does mean that history repeats itself in the show, as Savri the dusky girl who is actually the real daughter of Saloni (Rajshree Vaidya) might be shown going thro' similar situations that her mother had to face, when she was a child.

But as of now, the atmosphere on the sets has got lively with the kids coming in. But is it tough to work with children? "It's very hard to handle kids on the sets. They even get into a fight with regard to the shooting costume they want to be dressed up in. It so happens that if one kid likes another one's costume, she becomes pigheaded for the same. But all this is normal when it comes to kids, and we are enjoying their mischief", adds Deep. .

For Director Wasim, shooting with kids reminds him of his childhood days. "It takes more time and hard work to shoot with kids, but its fun too", quips he.

Let's see what new this tale woven around kids has in store for viewers!!

Ayushmann Khurrana Reveals the Reason Behind Enrolling himself to ...

roshnimv 11 years ago Well it was predicted that the story will go this way. Hope some other surprise element is there!

*Shruti* 11 years ago Expected twist. I hope Saloni finds out abt SAvir being her daughter soon!!

Ramesh Taurani Spoke To Sushant a Day Before He Passed Away; ...
35 minutes ago