Sahara One's supernatural thriller Shubh Kadam, produced by Cineviastaas will see the end of the first phase of the story line this week with the death of the spirit Manyata. 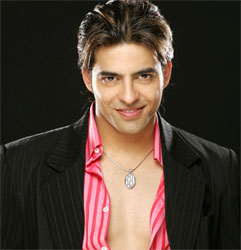 Featured Video
The family of Pratha (Mahi Vij) and Raghav (Pratik Shukla) move to a new house where the story kick-starts afresh.

According to our source, "There will be a new story line which will see introduction of few more characters.  And making his entry as the second male lead in the show is Himmanshoo Malhotra".

The actor was amongst the top three contestants of Zee's Cinestars Ki Khoj. He was also seen in Zee Next's Pyaar Ishq Mohobbat, Simply Sapney and 9X' Jiya Jale. He was also part of Bindass' youth based show Champ.

On the story line, our source explains, "Raghav and his family move into the new bungalow, where the ex-owner's son Swayam (Himmanshoo Malhotra) is still wrapping up his business. The young lad occupies a room on the terrace and will be there for the next three months".

Talking about Himmanshoo's character, our source states, "Swayam loves to be in isolation, and plays the flute very well. As the story moves on, Pratha finds him to be a suitable match for Chitra (Priyamvada Sawant) who has lost her husband. While Pratha starts to push Chitra to Swayam, the guy without knowing that Pratha is married falls in platonic love with her. He later realizes that Pratha is already married to Raghav".

We called Amita Devadiga, Creative Director who confirmed this news and said, "Himanshu will be the new entry in the show who will be part of everyone's life. He will enter sometime next week. As of now, the family and viewers presume that Manyata the spirit is dead. However only time will tell whether Manyata will be back or not. In addition to this, there will be a new mystery element thrown in the track".

We tried calling Himmanshoo, but he was unavailable for comments.

If sources are to be believed, Nazneen Patel who was seen in Sahara One's Main Aisi Kyun Hoon will also be entering the show in the near future. "She will be a part of Swayam's family", concludes our source.