Himmanshoo Malhotra who was recently reported to have dumped Sahara One's show Shubh Kadam for a meaty role in a new show is finally back to television again!! 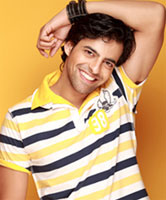 Talking about his role, the actor says, "I play the role of Sameer, a charming guy who is bit flirtatious. He is Aditya's close friend, colleague and boss in office; and is also engaged to Aditya's sister Aarti. As the story moves, the character will be shown as the very responsible person who helps Aditya in all his problems".

Aap Ki Antara, as reported exclusively by Telly Buzz earlier is the story of a special child who is autistic; who is actually born to Anuradha (Rupali Ganguly) and Aditya (Darshan). But Aditya is now married to Vidya (Prabhleen Sandhu) and has a kid Abhishek. A sudden tragedy hits the little girl Antara when her mother dies in a road accident, and this is when Aditya gets to know that he has a kid thro' Anuradha.

Elaborating on his friendship with Aditya, Himmanshoo states, "Aditya is a value-oriented guy who never knows to see the world practically. I am the one who advises him to be practical and not to hold on to ethics which do not give him any happiness. When Aditya gets to know about Antara, he brings her home and reveals to his wife that he has a kid thro another lady. This in fact shatters their happy married life and differences creep in between Aditya and Vidya, and this is where Sameer tries his best to bring them together".

"Sameer will go on to have a nice bonding with Antara once she comes to Aditya's house", quips the actor.

Talking about Antara played by little Zaina Vastani, the young lad verbalizes, "She is a very sweet girl, and it gives a nice feel to be shooting scenes with her. Wonder how at this age, the girl manages to understand everything that the director tells her. The role also demands certain mannerisms which Zaina delivers perfectly. She is simply good".

The response gotten for the show has been good, and as Himmanshoo puts it, "We have got a very good response for the first two episodes. The subject is very strong and we hope to make a place for ourselves in the viewers' minds".

Sony_1234 11 years ago the 2nd episode was soo touching. i got tears into my eyes. the girl-antra is soo cute. i wonder why rupali had to die soo soon. i hope to see her in some flashback sceens

tulipbaby53 11 years ago This show is so far so good!! I hope it does well! :D This guy is really good looking! hehe!

sami01 11 years ago one of best shows i have seen on tv ...hope they maintain it ,its just too good...and also empasises on the fact that simplicity is best ....little girl is too good

-Mink- 11 years ago so he is da one who will hv a special bonding wid antra i agree wid himanshu zaina is really a very sweet gal dat gal is doin a gud job she will make u smile as well as cry
m impressed wid da show hopes it does well (:

Bobby Deol is Thankful to his Fans for making the Aashram series ...

Aahana Kumra opens up about the #MeToo movement in India; says ...

"The people of this city stood behind me like a rock": ...

"I had actually burnt my skin and I had very major allergic ...

Kareena Kapoor Khan and Karisma Kapoor collaborate for a new ...

Jennifer Winget says she 'wants to dance again' as she shares a ...

Riteish Deshmukh recalls breaking up with Genelia over text: A ...