Remember Vineet Singh -- Himesh Reshamiya's blue eyed boy from an earlier session of Sa Re Ga Ma. Don't be surprised if you see him stepping out of a flat in a posh Mumbai suburb and getting into a Honda City! The Lucknow lad is doing pretty well these days it seems! 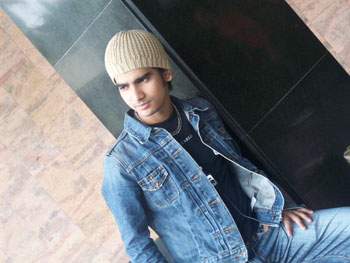 Featured Video
His mentor, did keep his word and gave him a chance to sing in his last two films -- Nanhe
Jaisalmir and Good Boy Bad Boy. We got in touch with the young singer to find out what he is up to these days. "I think I have managed a toehold in the industry and am now trying to carve a niche for me. In another couple of months, my first solo album will be released." Obviously, the music of the album has been scored by Himesh Reshamiya.

"Himeshji is no more my guru. He is my elder brother and is helping me with everything," says the young lad from Lucknow. "My solo album will have six songs -- all with a different flavour, with the opening number being a sufi song."

There were rumours of Vineet going around with fellow contestant Himani. What is the element of truth in it? "If I ever have an affair in my life, I will let the whole world know about it! There will be nothing hush-hush.After my album is released, I will tell you about the new girl in my life," says Vineet with a smile.

Vineet has been following Sa Re Ga Ma this year and feels Aneek is the winner, though Raja is ahead in terms of popularity.

Like his mentor, Vineet is also keen on trying his luck in movies. "Just after Sa Re Ga Ma, there was this producer who approached Himani and me for a film! It did not work out finally." Vineet is considering hosting a musical show like Sa Re Ga Ma. "I was considered for the show that Aditya Narayan is hosting. Unfortunately due to some contractual issues, it did not materialise.".

The 19-year old teenager is planning to relocate his family from Lucknow to Mumbai. "They have supported me all this while, now it is my turn to pay them back."

+ 2
14 years ago OMG VINEET I CANT BELIVE YOU DIDNT WIN I WAS SOOOOOOOOOO DISSAPOINTED I REALLY THOUGHT YOU DESERVED TO WIN YOURE AN AMAZING SINGER AND HEY WAS THAT SPECIAL GIRL THAT YOU ALWAYS TALKED ABOUT HIMANI KAPOOR???

14 years ago His voice is immature and he seems arrogant.

14 years ago oh hello !welcme back, i was wondering where u disappeared 2,well good luck with your career / new girl ,looking forward to your album.all d best.

amazing I mean, he hasnt disappeared as I had thought, but good that his album i being released. I am happy for him. He is soo adorable, and um good for him.

+ 2
14 years ago i wonder about himani's singing career....during the show judges used to say that she is true saraswati but now her career doesnt seem to be going anywere....

14 years ago vineet is an awesum singer....thnx for de article...

14 years ago there was one song of his in movie 'rocky' ... that was nice... i think the lyrics was like mujhe de de apna dil... something like that, he sounded so cute
and the one from 'good boy bad boy' was 'aashiqana mousam hai' that was cool too... i like only vineet's voice in that :)

+ 2
14 years ago hez good and all, but i think success is getting to his head and his ego is becomming prominent