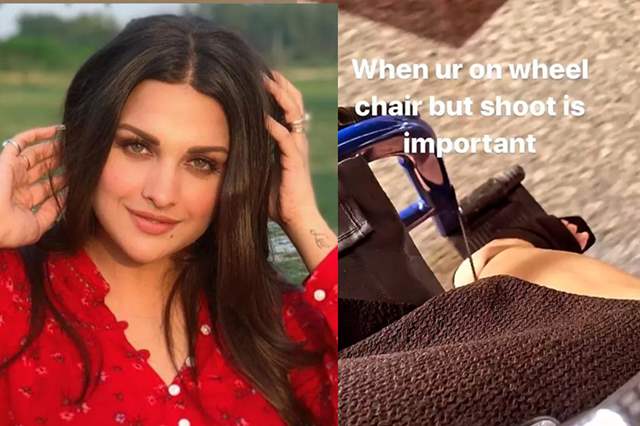 Himanshi Khurana, who was last seen in Bigg Boss 13 and has also featured in many music videos after that, will soon be seen in a new project. There has been a lot of buzz around the projects she has been working on and while there have also been multiple conversations around some of those videos with Asim Riaz, Khurana has never let anything bog her down.

And now, it looks like the actress recently injured herself, and yet, for her, work always comes first. The lady was recently at the Delhi airport while heading to Goa for some shoot. Amongst her stories, one caught our attention where she mentioned that even if she is in a wheelchair, work is important and this makes us wonder if she has injured herself.

However, it can now be confirmed that this isn't any injury that has led Khurana to be on a wheelchair but in fact, her PCOS has worsened leading to bad health. It was said that the swelling has increased a lot and bleeding is increasing too wing to which she wasn't able to walk. She even had a flight yesterday and a wheelchair was used to support her to board the flight. Since her condition is getting worse soon after the shoot, she will undergo a surgery.

Himanshi Khurana had recently opened up about having PCOS (Polycystic Ovary Syndrome). Talking to a media publication, the singer actress had revealed, "I have PCOS, whoever doesn't understand it, please go and surf on the Internet. Most of the girls go through it. People who know about it will relate with me. During PCOS, your body weight keeps fluctuating. Sometimes you lose so much weight and sometimes you gain a lot of weight. My blood pressure also fluctuates a lot. My BP levels sometimes drop so much that I have to take oxygen for three hours. My manager panics when I don't respond or get up. My entire team makes sure to keep me away from my phone when I am at home, they try to keep me distracted."

We hope Khurana gets better at the soonest.

zee112 12 days ago Really hope she takes care of herself and gets well soon.