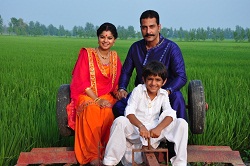 It seems that on Star Plus's Veera (by Beyond Dreams headed by Yash Patnaik and his wife Mamta) will be taking a turn like that of Man, Woman and Child by Erich Segal. In the upcoming episodes you will see Ratan (essayed by Sneha Wagh) discovering about her husband Sampooran's (essayed by Sudhanshu Pandey) love child. It will be a scene of high drama in which Amrita (essayed by Astha Chaudhary) comes to the doorstep of Sampooran's house with her baby girl in tow saying that as her days on Earth are numbered, she had no choice but to come to Sampooran's threshold as her child will need a home after she is no more.

Ratan is shell shocked to learn that the husband she trusted unflinchingly has been disloyal to her. She locks herself in a room, crying in anger and anguish and takes off every piece of shringar from her body and wipes off her sindoor too.

Little Ranvijay (essayed by Bhavesh Balchandani) sources a rakhi despite Rakshabandhan being over. With all his unalloyed innocence the boy is overjoyed when his dad tells him the candid truth that the baby is his sister. How does Amrita react to this? You will surely find out in the high drama forthcoming episodes of Veera.

Raghuvir Shekhawat writer of Veera confirms that there will be high drama in the upcoming episodes. When the cast and crew read a few of the scenes that will be telecast in the near future they had both tears in their eyes and a smile on their lips. He explains, "Veera is to show various emotions simultaneously. This is a complex and not a simple show."

Raghuvir also informed us that this show explores the mature relationship between a husband and wife. He explains, "We will show the pathos of the wife who feels cheated as the sympathy should go to her. However the audience will also feel for the errant husband." It will be interesting to watch how the village panchayat reacts to Sampooran who is the sarpanch in fathering a child out of wedlock. Sudhanshu Pandey seconds Raghuvir. He explains, "Sampooran was feeling very guilty and quite a few times he wanted to tell his wife the truth but it didn't happen because of various reasons. It just gets disclosed on its own and this surely wasn't his plan."

When we quizzed Raghuvir as to why he thinks that Qubool Hai seems to be far ahead in popularity on india-forums.com despite both being good shows he replied, "Veera is telecast later in the night than Qubool Hai- the content of both these shows which started on the same day is different. Qubool Hai is a love story. Sometimes urban viewers especially the youth don't connect that well with rural life and the happenings in a village panchayat. However I do feel that Veera will catch up in due course of time." 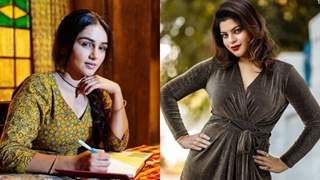 + 8
9 years ago the kids r just adorable!! am gonna watch this show!! the little boy is a delight to watch!! seriously adore him in the promos!!
n it is so much better than QH:s

9 years ago i love Veera ore than QH. but i love them both.

9 years ago we love veera and QH too ... don't be so rude and jealous of popularity of QH
..stories are different

+ 2
9 years ago Both are good shows and interesting concept

+ 2
9 years ago wat QH has to do with veera.. [:O]
unbelievable they asked such questions... havin a popular PH n popular actor can make any show popular no matter wat the content is...

+ 2
9 years ago i cant believe they asked the write"y is QH more popular on IF?" just because its production house had 2 hit romantic shows...n the lead was the hero of a youth entertainer.. nothing to do with the quality of shows!

+ 3
9 years ago Veera is an awesome show ...and it will stand the test of time ..I m sure ..a great stroy line which is already making me cry ...Love Ranvijay and mommy Sneha Wagh,such adorable scenes.

+ 2
9 years ago i like this show specially Veera & all babies.. so cute