Director Lal Jose's hugely successful campus caper 'Classmates' has inspired a crop of imitations. 'Heartbeats' is one of them.

With 'Heartbeats', director Vinu Anand has tried to make a film for and about youth by putting 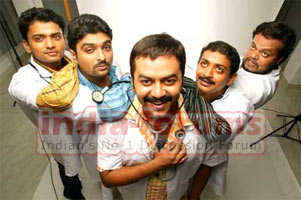 Featured Video
together some young actors, catchy songs and all other requisite ingredients that make a supposedly good campus caper. He also brings back erstwhile superstar Simran as an added attraction. Sadly, the tricks fail to work.

The story revolves around a group of four spoilt medical students, led by Indrajith, in a private college partially owned by their parents. They are against students who have got admission on merit because it spells a loss to their parents who could have sold these seats for hefty sums.

Currently, this is a burning issue in Kerala and the government is trying to regulate the fee structure in self-financed professional institutions and also provide a quota for meritorious students.

Anand certainly picked a topical issue and the film holds interest as long as it deals with the subject. But after a while it loses its focus and switches to an altogether different track. It takes the form of vintage comedies mastered by director duo Siddique-Lal and others.

The entry of a mysterious character close to the interval changes the film from a comedy to a suspense thriller. The transformation comes with the entry of Simran into the lives of the group. What happens from here to the end leaves the viewer dazed and confused.

Performance-wise, every actor seems to sleepwalk through his or her role. Indrajith, for whom it was an opportunity to establish himself as an independent star, couldn't do much as the script demands very little of him.

Manikuttan, Anup Chandran and Govindan Kutty have their moments in front of the camera. Manasa as second female lead is wasted in a two-bit role.

Simran does what is expected from her - exudes charm and does little else.

Ultimately, 'Heartbeats' ends up as just another wannabe 'Classmates'.