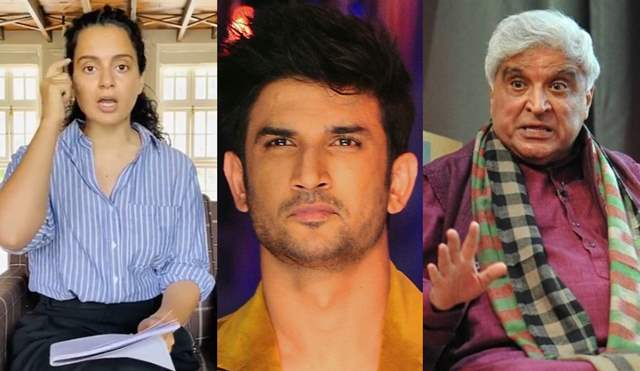 Sushant Singh Rajput's untimely death has shaken the whole Nation. The actor who was reported to have been suffering from clinical depression for the last six months took the drastic step of ending his life. On June 14, 2020 he was found hanging by the ceiling of his residence in Bandra, Mumbai.

His death has come as a shocker for everyone and has sparked a huge debate about nepotism in Bollywood. It has created a stir in the media and has led to a social media war leaving the Hindi film industry divided. It has also piqued the fans who are currently seeking answers and fighting to know who's right.

In between one such social media fight is, actress Kangana Ranaut! The actress who is known for her outspoken nature keeps getting involved in one controversy after another for speaking her mind bluntly

After recently calling out Mahesh Bhatt for comparing Sushant Singh Rajput to Parveen Babi, she now shared her struggles and outbursts because she faced the similar ones as that of late actor Sushant.

Also Read: Kangana Threatens to Leak Names of Biggies Who Ganged Up Against Sushant; Reveals Mukesh-Mahesh Bhatt Instigated her to Commit Suicide

Here are some excerpts from Kangana's statements shared by her spokesperson with us:

Recalling her horrific incident with Javed Akhtar related to her controversy with Hrithik Roshan, Kangana says, "Once Javed Akhtar had called me to his house and told me that Rakesh Roshan and his family are very big people. If you don’t apologise to them, you will have nowhere to go. They will put you in jail, and eventually, the only path would be that of destruction…you will commit suicide. These were his words. Why did he think if I don’t apologise to Hrithik Roshan, I would have to commit suicide? He shouted and yelled at me. I was shaking in his house."

She further revealed, "Were there people calling Sushant? Were there people putting such thoughts into his mind? I have no idea, but obviously, he was in a similar situation. In his interviews, he had said that nepotism cannot co-exist with talent because they don’t allow the right talent to come up. I can relate to it, and hence I am raising questions. I want to know who played the catalyst in this situation?"

To prove her point about being bullied professionally, Kangana says, "I know Sushant had a big fallout with Aditya Chopra also. When I refused Sultan, he had threatened he would never work with me. Ever since our industry ganged up on me. I remember so many times feeling really lonely and feeling what will happen to me… Why do these privileged people have the power to say that they will never work with someone? It’s your choice if you want or not to work with someone, but why announce it to the world, gang up and make this happen!  These privileged lots need to be questioned. They have blood on their hands. They need to answer, and I am ready to go to any extent to expose these people because enough is enough!”

Kangana also revealed that all this not only happened to her professionally but personally as well it hampered her relationships. “They are very insecure about things. Despite what they did to me, there was a guy who wanted to get married to me. But he distanced himself, they made sure he ran away. With no surety about my career, my love-life completely has gone awry, with six court-cases against me, they’re still trying to put me in jail."

She further adds, "I’m a different person; I’m very expressive. I went out there, and I just vented it out. Sushant was not a person like that at all. He just bottled it up. Media too, has played a considerable part in this—the kind of monster image that was given to him. Everybody who knew him closely agrees that he was a soft and emotional person. I think that after a point it really got to him. I can understand it because even I have been portrayed as a witch and as a stalker."

All the bullying and outbursts had a psychological impact on her life situations. “I remember initially when people used to come to my home, I felt so embarrassed to even offer them water. Forget having a relationship or going on a date post the disaster of a relationship I had. I can only imagine that even during Manikarnika what they did to me. But perhaps he  was just not able to vent. In fact, all these constant jibes on these petty shows that he should be killed and which rated him as the least efficient… his films have done more business than your Gully Boy. People like Salman Khan said who Sushant Singh Rajput? It was after M.S. Dhoni: The Untold Story, everybody knew who Sushant was. We need to stop these,” she ends.

Now, Kangana's team has released a video of the actress revealing details of how Sushant Singh Rajput has been killed by the Bollywood Mafia slowly and bits by bits. The caption reads: "Emotional, psychological, and mental lynchingon an individual happens openly and we all are all guilty of watching it silently. Is blaming the system enough? Will there ever be change? Are we going to see a monumental shift in the narrative on how outsiders are treated?"

In the video we can see Kangana sharing how she has researched about Sushant and the reasons that might have led him to take the drastic step. She shares that she has thoroughly watched the actor's previous interviews and that she has also spoken to a lot of people directly.

She goes on to say that in one of the interviews, Sushant's father has revealed that his son was worried because of the tension going on in the film industry and then points out at the statement given by the director of Sushant's film Kedarnath, Ahishek Kapoor who said that "I was a systematic dismantling of a fragile mind" and also spoke about Ankita Lokhande who said that "Sushant was extremely disturbed with the public humiliation and insult done to him by many people and couldn't take it anymore".

Kubbra Sait Slammed By Kangana For Supporting ...
25 minutes ago