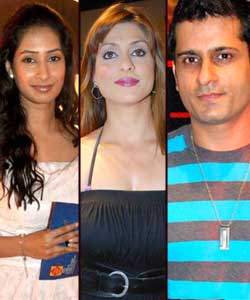 The Vikram Bhatt show assures stellar performances. With rumours abuzz about Gautami Kapoor being approached for Vikram Bhatt's Haunted Nights on Sahara One, we have come up with some more exclusive gossip, right from the sets.

A source says, "As the shoot has begun, the horror episodes would witness many seasoned actors who have done great work in the past. They are renowned faces of the television industry."


The latest we hear is that after Rashmi Desai Sandhu and Gautami Kapoor, a few other names that are expected to join are Amit Sareen, Priya Marathe ( Pavitra Rishta fame) and Shilpa Saklani Agnihotri (Survivor India-The Ultimate Battle contestant).


A source informs, "Seasoned actors such as Amit Sareen, Shilpa Saklani Agnihotri and Priya Marathe would be seen in one of the episodes of the show.Amit Sareen would essay the character of a doctor who has a mysterious past which fires back in the present."


We contacted Amit who confirms, "It's great to work with Shilpa after our Kyunki Saas Bhi Kabhi Bahu Thi days.Priya was paired opposite to me in Pavitra Rishta.


The horror nights are getting ready to hit the screen… beware!

9 years ago Vikram Bhatt must be congratulated for the perfect casting! ;)

9 years ago Shilpa Saklani, has done more then Survivor India, so that is not her only QSP, web-writers should do some research. Unless they are being paid to write the show names to promote them.

9 years ago shilpa looks like a bhoot in the pic!!!!

9 years ago Good to see Shilpa back, hope she does a fullfledged serial instead. Horros shows I dont watch so cant watch this one.

+ 3
9 years ago Looks like many actors are returning which is great, shilpa is back into acting , will be interesting