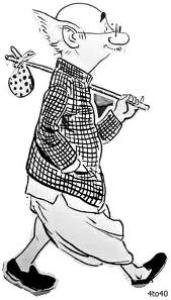 Few weeks ago, Tellybuzz had exclusively reported about Speak Asia filing a case against Hats Off production's R. K. Laxman ki Duniya as they telecast an episode in which they used the word Silent Asia, which eventually prove to be the fraudulent organization in the story.

These particular episodes caught the sight of the Speak Asia people, who then filed a case against the production house demanding that the show be pulled off air as it was spreading incorrect messages to the audience about Speak Asia.

But the latest we hear is that Hats Off Production has won the case against the company leaving all the charges on them as null and void.

"Speak Aisa had filed a case on Hats off for using the word Silent Asia, which seemed similar to the word Speak Asia and was blamed to be a fraudulent company on the channel. But as per the hearing of the case, the word Asia seemed to be the only common word which was used by both and the word can be used by any one. Therefore, the case and all the charges on Hats off were dropped, "adds the source.

The final hearing was held on the 29th of Februray.

We contacted Jd Majethia and he confirmed the buzz.

MAANVEER3 8 years ago wow, the things people come up with for publicity. Good job Hats off

8 years ago ye yeee!! super cool you guys !! and congratulations!! you guys taught them a good lessoon!