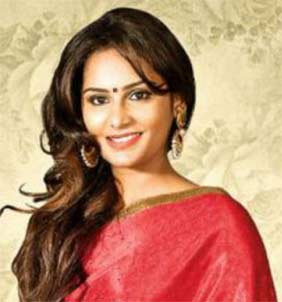 When actress Lakshmi Priyaa Chandramouli entered Tamil filmdom a few years back, she vowed to concentrate on being an actress and not transform into a heroine. She continues to do so and is happy with her career with five projects in her kitty.

"Out of the films I'm currently doing, I'm playing character roles in two of them. I'm doing them because I absolutely love the roles. I choose my characters based on the weightage of my role and not based on whether it's a lead or not. I'm happy being an actress than heroine," Lakshmi told IANS.

While Lakshmi remains tight-lipped about her roles in "Yagavarayinum Naa Kakka" and the film featuring Nayantara, she says she thoroughly enjoyed working with a bunch of newcomers in "Kallappadam".

"It's an interesting film ('Kallappadam'). It features the film's director, editor, cinematographer and music composer who play themselves in the movie. It's about how first-timers try and make a film braving all the challenges thrown at them by the industry," she said.

"I play a heroine who was successful but doesn't have a market now. It's a lighthearted comedy about these four characters and the movie they want to make. I thoroughly enjoyed working with the young team," she added.

She also says working in "Angels" was an exhilarating experience.

"I don't know Malayalam but I learnt the language for the film. In Tamil, we work from 9 a.m. to 6 p.m. There they work from 6 a.m. to 9 p.m. They work long schedules completely without a break. They don't even take Sundays off. If they have to finish a film in 30 days, they will finish it come what may," she said.

"It was exciting working in a new industry and my co-star Indrajith (Sukumaran) was a through professional. There's so much to learn from him," Lakshmi said.

Molkki actress Priyal Mahajan on shoot shifting base: We have to stay ...