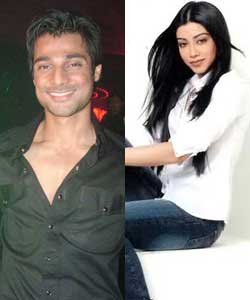 It's time for some celebration in Star Plus' Iss Pyaar Ko Kya Naam Doon?, as it is the wedding anniversary party of Shyam (Abhaas Mehta) and Anjali(Daljeet Kaur Bhanot).

On the occasion to be aired in this weekend's Maha Episode, there will be a special performance coming from the known choreographers of Jhalak Dikhhla Jaa fame, Hanif Hilal and Nicole Alvares. They will be performing on the popular number 'Character Dheela' from the movie Ready.

We contacted Hanif who confirmed the news, "Yes for the first time I will be performing in a fiction show; I always perform in nonfiction shows and this was an amazing experience. I danced with Nicole and the sequence has come out very well".

We tried calling Nicole, but she was unavailable for comment.

The Maha Episode will have some gripping moments with both Shyam (Abhas Mehta) and Khushi (Sanaya Irani) being at the party. We hear that there will be many hit and miss sequences between them.

Catch the Maha Episode this Saturday, 20th August on Star Plus..

SaniZeesh 8 years ago sanaya irani i love ur smile the most :)

WooHooHaha21 9 years ago Errmm! Not excited about the dance performance! But lets see how the hype is created with Anjali Shyam and Khushi together! And Arnav to be the icing on the cake! =D

vnnn 9 years ago I loved your performance ;)

noorie_ 9 years ago Hahahahha!!
Looks like even the CVs know which song suits shyam's personality best!
Great going CVs! Keep it up!!
Now, for a passionate ArHi dance sequence...:)

nabeela. 9 years ago Nice... would like to see an ArHi dance too!