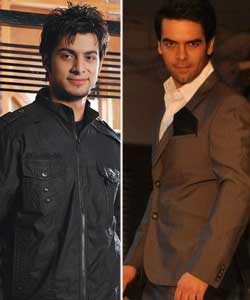 As we know, the track of Colors' Hamari Saas Leela is going through a tension filled atmosphere, but not all know that the production house Neela Telefilms is also having a testing time in balancing the story track between all characters!

We had already reported that few actors were unhappy as their tracks were being ignored. The latest we hear is that Sanjay R Gagnani and Karam Rajpal who essayed Leela's son in law Shishir and Leela's fourth son, Ayush respectively have quit the show.

Yes, you have heard it right! The two pivotal characters have quit the show after citing reasons of not being given a regular track..

A  little birdie chirps, "Sanjay had earlier discussed his problems with the production house because as per his concern, the production house asked him to block 25-28 days in a month, but they hardly utilized his dates. Since no due action was taken on this, Sanjay has ended up leaving the show".

Talking on Karam's side of story a source informs, "Karam's character of Ayush was hardly seen in the show. He was initially introduced after which Karam was asked to sit at home for two months due to no development in track. But the actor found no pleasure in playing the waiting game,and has quit".

We contacted Sanjay R Gagnani and he said, "I wouldn't like to comment on this. All I would say is that it was good working with Neela Telefilms but now it's time to move on and I will be back with a new show soon".

Karam Rajpal comments, "I have been waiting to shoot for the past three months and I am really bugged. I can't keep waiting as I have other offers too. So I quit".

We too hear that Karam Rajpal had got a final call from the production asking to stay back in the show but Karam's decision remained the same.

We contacted Producer Asit Modi and were taken by surprise as he remained clueless of the developments, "I have no idea about this, it would be better if you have a word with the actors".

With both Sanjay and Karam gone, it will be interesting to see Who will be the new Shishir and Aayush in the show..

Hamlet53 9 years ago deighted to hear that colorsprogrammes are getting negative publcity hope this cursed , and anti marrige channel shuts down for good

brainychild92 9 years ago they had an actor to play the son?! i thought it wasn't finalized so they didn't show us him...

-sahasra- 9 years ago this show has totally lost the plot.i respect the decision of these actors.its better to look for other oppurtunities than sitting at home n waiting for their chance to come.sanjay was shown atleast 2-3 epi but this bechara karam rajpal was restricted to a video bit wishing his mom on her b'day,no direct entry in the serial wasn't shown yet.

Keva 9 years ago With the way Colors shows are going on I won't be surprised that their actors will quit and then they all will be sitting with scripts but no actors to perform maybe then the creatives can become the actors as well. ROFL

Good for the actors who quit Colors shows. FYI you are definitely not missing out on anything.

taral83 9 years ago I have not even seen Ayush on the show...(i missed a few episodes it was boring)...so won't make a difference to me (not like it was anyway, its tv for god sake)

Robie23p 9 years ago Oh god...!! What an utter crap this show is...! First cv's changed the genre of the show to get trps... But they failed in tht... And finally two important characters hv left the show... And d Producer is clueless..! Well this show is the wastage of talent of some very gud actors... And all of them shud leave the show, and let the producer asit modi play the role of leela... And change the name of the show to 'Hamari production house leela' ... Crap show..! Huh..!

siyona 9 years ago seriously..they shud give equal imp to all characters..hardly get to see the 4th son n jigna's inlaws side..

suryasingh 9 years ago Good decision!. Better to do something else instaed of working in this type of useless shows

krnagu 9 years ago Good decision!. Better to do something else instaed of working in this type of useless shows

Sanjay Gagnani tests negatieve for COVID 19, to resume ...
40 minutes ago

Gurmeet Choudhary and Debina Bonnerjee test positive for ...
52 minutes ago