Star Plus’ afternoon show, Hamari Devrani, produced by Shobhana Desai Pvt. Ltd. will get a mystery element to the story in the coming weeks. 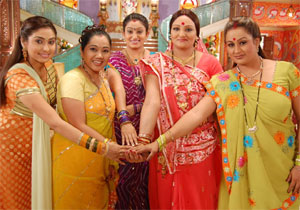 The Jethanis of the Nanavati family who crave for power and money have intentionally got their youngest Jamaai Mohan wedded to an innocent, simple and village-bred girl Bhakti (Krishna Gokhani) so that they can tackle their Devrani and keep her under full control.

But now, a new twist in the tale reveals that the Jethanis have a bigger motive behind keeping Mohan and Bhakti under control.

According to our source, “There will be a mystery element introduced very soon, wherein during the Dandiya celebrations, a lady will be shown hovering around the Nanavati family, especially the Jethanis. The whole family goes out of Ahmedabad after the Navrathri festival, and on their return this lady will make her presence felt before the family”.

“The role of the mysterious lady will be played by Purvi Bhatt, and as the mystery unfolds it will be revealed that this girl is actually the link as to why the Jethanis have been controlling Bhakti and Mohan’s actions”.

The story as of now focuses on the so-called 'Sout' of Bhakti, Chanda who has been planted by the Jethanis to amass all money from Devki, the mother of the Nanavati family. "Devki and Mohan tactfully play a game and will get successful in throwing out Chanda from the house", confirms our source.

shruti 12 years ago God knows when the Jhethani's evil deeds will come out in front of everyone.